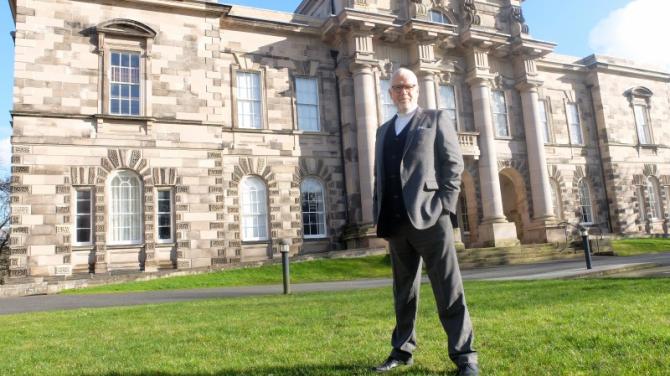 THE Presbyterian Church has announced that it will be holding a special commemorative event later this month at the Union Theological College – the first home of the Parliament of Northern Ireland.

Entitled ‘On these steps’ the event will include historical analysis, music and drama, along with a reflective address from the Church’s Moderator, before an audience of invited political and civic guests from across the UK and Ireland.

Scheduled for 17 September it takes place nearly 100 years to the day, when MPs and Senators ascended the College steps for the first time to meet as the Parliament of Northern Ireland, before moving to Stormont, its permanent home, 11 years later.

Looking forward to playing his part in this historic occasion, PCI’s Moderator, Right Reverend Dr David Bruce will address the livestreamed event, which will focus on the Christian principles for imagining a better future across the island for the next 100 years.

“As an all-Ireland denomination, we felt that it would be appropriate to mark the centenary by acknowledging the role that our College played as the first home of Northern Ireland’s parliament, following the partition of the island in 1921.

“ Known then as the Assembly’s College, ‘On these steps’ marks a moment in time not only unique to us, but which is also very much part of the wider story of this island as a whole,” he said.

“In holding this special event we recognise the diversity of views around this anniversary, understanding that for some marking 100 years of the foundation of Northern Ireland has been a cause for great celebration, while the centenary of partition for others is characterised by a sense of profound loss and separation.

“We hope that ‘On these steps’ will be an opportunity at this particular point in our history to create space to hear different perspectives and build an understanding of how the lives of communities across PCI, and this island, have been shaped by the events of 100 years’ ago.”

Dr Bruce concluded by saying, “We also have a broader aim beyond the commemorative, as we seek to build relationships by bringing people together to reflect on our shared past, in a way that enables us to look in hope to a shared future.”

Having been officially opened by King George V in Belfast City Hall in June 1921, the Parliament met for the first time at the College on 20 September that year.

A musical and dramatic interlude, which involves a re-enactment of the King’s Address, will form part of the event, along with an historic perspective brought by Ian McBride, the Foster Professor of Irish History at the University of Oxford - and a native of County Armagh.

Professor McBride said, “Speaking nearly a century ago, Winston Churchill famously remarked, ‘The whole map of Europe has been changed. The position of countries has been violently altered. The modes of thought of men, the whole outlook on affairs, the grouping of parties, all have encountered violent and tremendous changes in the deluge of the world, but as the deluge subsides and the waters fall short we see the dreary steeples of Fermanagh and Tyrone emerging once again.’ Churchill was reflecting on the new governments of Northern Ireland and the Irish Free State.’

“To Churchill, the partition of Ireland was the consequence of ancient hatreds which had stubbornly survived the cataclysm of the First World War.

“Historians have often taken the same view. In my reflection, I will revisit the men and women of 1921, examining the hopes, anxieties and resentments focused on the new Parliament of Northern Ireland at Assembly’s College.”

Professor McBride continued, “I want to demonstrate that our predecessors were not motivated only by inherited prejudices. Their beliefs and values were shaped by the deluge of the Great War, and found many parallels in contemporary Europe.

“I will also consider how far those beliefs are still relevant in 2021.

“Finally, I would like to suggest ways of commemorating the creation of Northern Ireland that challenge, rather than reinforce, political division and polarisation.”

Echoing the Moderator’s comments, Rev Dr Tony Davidson, convenor of PCI’s Peace and Reconciliation Panel, said, “Marking the centenary of partition and the creation of Northern Ireland in this way enables us to acknowledge a defining moment in the story of these islands, while providing space to reflect respectfully on how we deal with the legacy of our shared past and how it affects current relationships today.

“ I also hope that it will play its part in the ongoing work of peace and reconciliation.”

Dr Davidson explained that the event will be followed by a series of webinars.

The four-part series will seek to unpack ‘On these steps’ and its themes to the wider Irish Presbyterian community.

Dr Davidson said that the hoped it would “encourage us to think about what it means to be Christian citizens on the island of Ireland over the next 100 years.”

You can watch the livestream of the event via the www.presbyterianireland.org from 2pm on Friday, 17 September 2021.