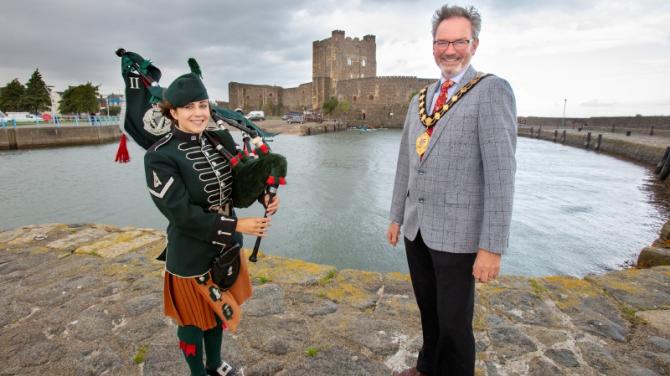 A limited amount of free tickets for a spectacular display of military music at Carrickfergus Castle are being made available to the public at 9am on Saturday 28 August.

The concert, taking place at 7pm on September 11, will see the Massed Bands of the Army's four Irish Regiments perform together for the first time in Northern Ireland in 35 years.

The evening will feature displays from the bands of the Irish Guards and the Royal Irish Regiment, alongside the Pipes and Drums of the Royal Dragoon Guards and the Queen's Royal Hussars. There will also be a special performance from a choir of Fijian soldiers who serve in Irish regiments.

You can register for tickets on Eventbrite here. Numbers are limited so the event is being live streamed across Mid and East Antrim Borough Council and the British Army’s social media platforms.

Mayor of Mid and East Antrim, Councillor William McCaughey, said: “We’re so pleased to be able to offer a small amount of tickets for this spectacular show to the public. We know the demand for tickets will be high, so for anyone who doesn’t get one, Council and a number of British Army pages will be live streaming the event on our social media platforms to make sure nobody misses out, and uploading it after the event so you can view it at a time to suit you.

“We are delighted to welcome such talented musicians from our Armed Forces to Mid and East Antrim and to Carrickfergus, a town so richly steeped in military history, to entertain and inspire future generations.”

“This will be a truly magnificent event involving a number of musical displays from across the four Irish Regiments, the first of its kind in four decades.”

“We are privileged and honoured to be able to showcase our musical talents to the people of Northern Ireland."

There will be no disruption to road traffic with minor diversions for pedestrians at the old harbour. Temporary public toilets will be provided

It is strongly recommended that anyone attending the event should take a Lateral Flow Device test (LFD) no more than 24 hours before they attend and on days two and eight after the event. If you have any signs or symptoms or feel unwell, you should not attend and should follow the advice found at the NI Direct website

Anyone attending the event will have their temperature taken prior to entry and anyone found to have an abnormal reading will not be granted access.