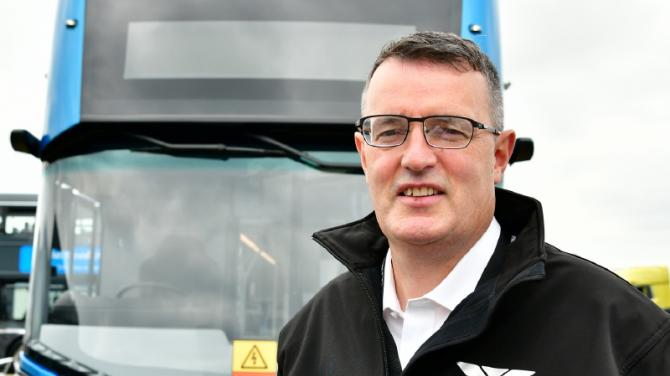 Wrightbus is to create up to 300 permanent jobs after winning a string of orders from the UK and Ireland.

And local MP, Ian Paisley says it is now time for PM Boris Johnston, once a prominent visitor to the local factory, to live up to his green transport promises.

The firm, which is leading the world in zero emission passenger transport, will also convert 120 existing temporary jobs into permanent positions as it looks to ramp up production at its Ballymena headquarters.

Wrightbus, which was bought out of administration by green entrepreneur Jo Bamford in October 2019, had just 56 members of staff when he took over.

Now thanks to an incredible period of growth driven by the development of word-leading technology - including the creation of the world’s first hydrogen double decker bus, and a market-leading electric double decker bus - the firm is on track to have 930 permanent employees once the new positions have been filled.

Wrightbus hopes the job roles, which will include skilled, semi-skilled, general operators and support staff, will all be filled in 2022.

“It’s a fantastic success story, and not one many people would have imagined just a few short years ago,” said Wrightbus MD Neil Collins.

“In the last two years, the company has not only been bought back from the brink, but has been reinvigorated and has seen a period of phenomenal growth. We’ve launched the world’s first hydrogen double decker, we’ve launched the fastest-charging double deck electric bus on the market and we’re now the UK’s only bus builder with both a hydrogen and electric product on the market.

“Our order book is looking very healthy with our zero emission buses in high demand, and we have multiple conversations ongoing with a number of bus operators from across the UK and Ireland. And let’s not forget that this has all been achieved despite the terrible effects of the global pandemic over the past 18 months.”

Mr Collins said employees joining the firm would get the chance to be involved with world-leading technology and systems that were at the forefront of revolutionising the transport industry.

“Our zero emission buses are truly world-leading and we’re incredibly proud of the part they’re playing in the UK’s race to net zero. The fact that our employees get to play their part in this effort makes them incredibly proud, not to mention the fact that they are developing and working with the technology of the future.

“We’re building an incredible team in Ballymena and we want the best people to come and work for us. We’re aiming to increase bus production again next year, which will in turn lead to the creation of even more permanent jobs. It’s an incredibly exciting time to be involved with Wrightbus.

“We’ve got a strong future ahead of us and we’re proud to be playing an important part in the wider post-Covid recovery of the Northern Irish economy,” he added.

Jo Bamford, who has been the driving force behind the change in fortunes at Wrightbus since buying the business, said: “The last two years have not been easy. We’ve not only had to pull the company back from administration, but we’ve also had to get through unprecedented times due to the effects of the Covid 19 pandemic.

“Introducing two new world-leading products in the Hydroliner and the Electroliner, and being able to bring the workforce up from just 56 people to more than 900 in those two short years is incredibly satisfying, and shows the marked determination that we all have to make sure this business is a world-leading success.

“We’re continuing to invest not only in employees, but in the technological advances that will keep our buses at the very pinnacle of the industry. I’m proud to say Wrightbus is firmly back in business, creating jobs not just in Northern Ireland but indirectly across the UK - and this is only the start of the recovery.”

All jobs will be advertised on the Wrightbus website. For more information and to apply, visit the Careers page at www.wrightbus.com.

North Antrim MP said the workforce increase was ‘This is ’a significant development’.

He aded: “The effort made to increase bus orders from around the country means that the company is able with confidence to expand. These will be full time jobs and not agency jobs so it is great news for the local economy and once again sees a manufacturing and precision engineering firm as one of the premier employers in this area .

“In just over a year under the new management of Bamford and his team, the company has gone from millions of debt and bankruptcy to profitability!

It is now exceeding growth plans and expectations. All of this has been done with minimal government intervention.

“I have today written to the Prime Minister reminding him of his zero emissions objectives. He has stated he wants to see 4000 zero emission busses in the U.K. in his first term as PM.

“Only a handful of these busses have been ordered and built. The governors promise on this would be a significant boost for bus building across the U.K. and one that Wrightbus with its advanced technology would gain from.

“ It is up to the PM and his transport team to now make good on these commitments and I believe orders resulting from that would increase employment on this site yet again!

“Hydrogen technology is the way ahead for zero emissions and a hydrogen hub in Ballymena training engineers and developing products would be a natural fit for the area. The prospects of this throw out challenges to schools and colleges to encourage engineering and science subjects to local children as there will be significant and skilled jobs available in this sector in the years ahead. We do have a skills shortage and that gap must be plugged.”

The Mayor of Mid and East Antrim, Councillor William McCaughey, has said the news is a “major boost” for the Borough.

“The strong growth trajectory and success experienced by Wrightbus over the past two years, despite challenges posed by the global pandemic, is testament to the outstanding resilience and ambition of the business, its leadership and its employees,” he said.

“This significant job creation not only brings a major economic boost to Mid and East Antrim and the wider Northern Ireland economy but serves as a ringing endorsement for the Borough’s long-established reputation as a hub for advanced manufacturing.”

The Mayor explained that, through its industry-led Manufacturing Task Force, Mid and East Antrim Borough Council is driving an ambitious strategy to cement the Borough’s position as a CleanTech Centre of excellence with a particular focus on hydrogen .

“The Manufacturing Task Force was formed to work closely with companies like Wrightbus in providing a robust platform to support economic growth of the production sector through job creation, inward investment and skills development.

“Part of our long-term vision is to establish a hydrogen hub in the Borough as part of the government’s wider green energy revolution, which will include the development of our innovative hydrogen training academy to provide bespoke training to support Northern Ireland’s growth in the renewables sector.

“That one of our local companies is already making such great strides in hydrogen and electric-powered transport for the global market signals strong confidence in the Borough’s long-term potential in this sector.”

Congratulating Wrightbus on its success, Councillor Gregg McKeen, chair of Council’s Borough Growth Committee, said: “Council has enjoyed a longstanding, collaborative relationship with Wrightbus for many years as one of the Borough’s leading employers and exporters. We remain committed to doing everything we can to support the company as it progresses to this next exciting phase in its growth journey.