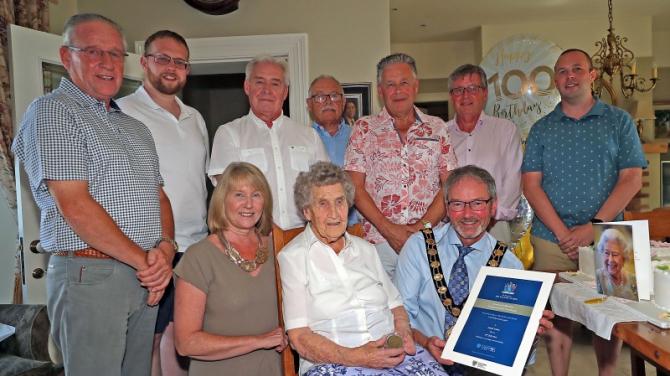 Many congratulations to Mrs. Annie Mairs who reached her 100th Birthday last week.

Born on July 21, 1921 at Portglenone, Annie Anderson Taylor was one of six, three girls and three boys, Only Annie and a younger sister Margaret are still alive.

She went to school at Aughnacleagh public elementary school until 14, then worked in Hannah's shirt factory in Portglenone for six years, before moving to the Loan, Cullybackey.

Annie worked in Gallaher's for six years and finally in a sewing factory in High Street.

After her marriage to William (Billy) Mairs a lorry driver with the UTA in 1950 the couple moved to Harryville in Ballymena and had seven children.

Tragedy struck on 1st March 1990 when daughter Marrianne and her husband Kevin Fowler were killed in the Slaght Railway Crossing accident leaving two children aged 9 and 6.

Annie and Billy took on the responsibility of bringing up the two boys until they married and then in her late 80s moved into Tober Fold, where she resides to this day.

Son James said: “My mother is a remarkable woman who has a strong Christian faith and is still as bright a a button mentally.

“She has her own i pad for face time calls and listening to church services or keeping up with the news and photos. She is an avid Guardian reader as I get it for her every Tuesday.”