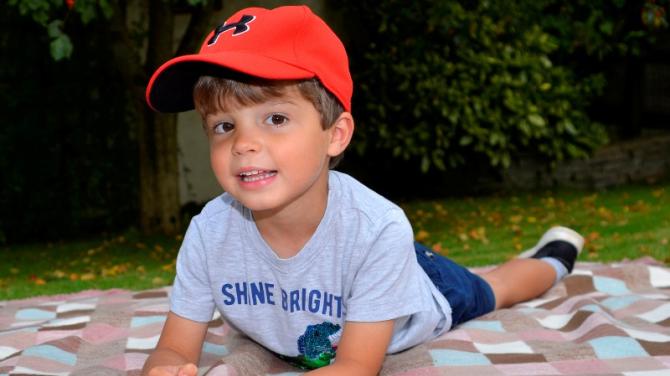 ‘NOWHERE SPECIAL’, which features Ballymena boy Daniel Lamont alongside actor James Norton, will be released in the UK on July 16!

Daniel, a pupil at Camphill Primary School, starred in the movie, which he has since seen twice already , but points out he is more interested in school, which has since broken up for Summer, and karate!

Nowhere Special’ is a story about a father John (James Norton), who dedicates his existence to his three-year-old son (Daniel) after his mother left them soon after giving birth.

But when John is given just months to live, he sets out to find a perfect family for his little boy once he is gone.

Meanwhile, back in September last year the Guardian did a special feature on Daniel making his screen debut.

At that time the lad said he was uncertain if his future career would be in movies.

But those in the know believed he could well have what it takes to be the next Liam Neeson!

And he also had the pleasure of a front row seat at the movie premier at last year’s 77th Venice Film Festival.

Daniel seemed to have taken it all very much in his very little stride.

For days after returning from Venice he sailed through a day back at school, non the worse for wear after rubbing shoulders with the film world elite.

His proud parents, Geoffrey and Kasia, and older sister Erin (10), were special guests at the film premiere in Venice.

“If anyone ever believes that actors swan about, having the time of their life as they make their films, then I have news for them! It is hard, hard work,” said mum, Kasia, who accompanied Daniel during his six-and-a-half week’s filming in Belfast, Larne and Bangor.

But Kasia was quick to point out they have no intention of pushing young Daniel into the film industry.

“We want Daniel to have a normal life. If he decides it is something he wants to pursue then he will have our full backing. If not, no harm done,” she said at the time.

I met up with Daniel and his family at their home last September.

When I first caught a glimpse of him he was flying around outside his house on a scooter!

He said ‘Hello’, but continued on his way. Too nice and sunny an evening to sit and discuss little things like co-staring in a movie!

Mum Kasia took up the story, outlining just how her son ended up being selected, out of hundreds, to get the co-star role in ‘Nowhere Special.’

“There was a post on Facebook, saying a casting director was on the lookout for ideally a four-year-old identical twins to play a part in an upcoming film,” explained Kasia.

“Daniel had been in a play at Ballee Play Group and a number of teachers mentioned to me just how good he had performed, taking it all very seriously."

Kasia continued - “Erin and I were scrolling on FB one night and seen a post about the casting. So I sent a photograph of Daniel and the relevant details, and honestly thought no more about it, ... it was done for a bit of a laugh.”

Some time later an e-mail popped into the Lamont messages on their computer, requesting a meeting with Daniel.

The Lamonts attended and the number of hopefuls started to be whittled down - but they were kept on, and on ..... and on!

A few weeks later they got word they were still in the running, and Kasia admitted they werr starting to allow a little bit of excitement to creep in.

They were now in the last 20, and after the second casting they were all asked to come down to Belfast.

A third casting followed and at this one they met the casting director. Things were starting to get quite serious.

Parents Geoffrey and Kasia were able to ask all the questions they wanted - just in case their son ended up being selected.

Then came the news that producer Uberto Pasolini and actor James Norton wanted to meet them in Belfast.

Both parents admitted it was all starting to get very stressful.

The pressure of getting Daniel to P1 and Erin ready for the return to school, and the possibility of their son being selected to co-star in a film, was all starting to take its toll.

Geoffrey and Kasia recalled that they had taken Daniel and Erin camping when they received the call.

“My hands were shaking when I answered the phone, knowing who was ringing and why,” said Kasia.

Both had spoken about the thrill the news, if it was good, would bring.

But they also weighed up how sad it would be if they had to break the news to Daniel that he had not made the call-up.

“At this stage and getting this far in the selection process I must admit we were both getting excited at the thought of Daniel being in the film. But we also had concerns regarding what if he does not get the part,” outlined Kasia.

The Ballymena lad had came through all the hurdles - and now the hard work was about to commence. He had got the part!

Actor James Norton called a good few times with the Lamonts for dinner or for Chinese or just to play with Daniel and Erin, enabling him to familiarise himself better with the young man he would be working with during filming.

Mum Kasia proudly points out that, at the time of filming, Daniel was a very ordinary down-to-earth four-year-old little boy - but when the signal ‘Action’ is given at the filming shoots be became completely transformed.

“He really goes into acting mode when required, doing all he is asked to the very best of his ability,” said Kasia.

Towards the end of the interview Daniel was called over by his parents to say thank-you for the paper calling out to report his role in the film.

I asked him if he wanted to be a film star when he grew up, and after a few seconds pause he replied - “Maybe.”

Next he smiled, waved and said “Goodbye’ before getting on to his trusty scooter and heading back out to meet up again with a handful of friends.

Recently Daniel, reflecting on his time acting with James Norton, described the experience as - “cool.”

Ahead of its Northern Irish premiere at the Strand Arts Centre in Belfast, Daniel said he is getting used to seeing himself on the big screen.

Daniel's mum Kasia described watching the film with her family in Warsaw was emotional.

And she revealed that they have been approached by a few agencies in London and there have been offers of big productions.

Kasia said Daniel is still very young, and they want him to enjoy his childhood.

She added if wants to act they will support him.