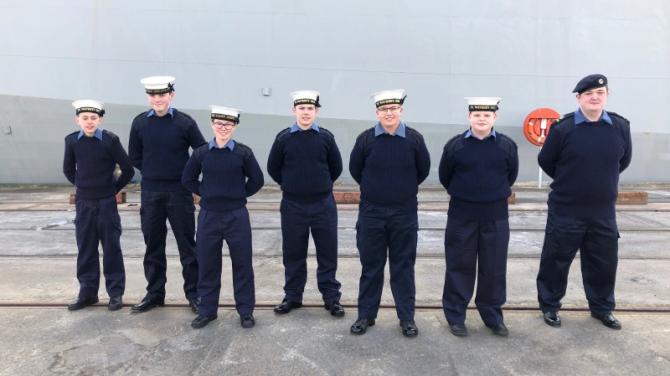 BALLYMENA Sea Cadets won a £1,000 ‘Movement for Good’ award from Ecclesiastical Insurance Group thanks to nominations from the public.

They were one of 500 winners in specialist insurer Ecclesiastical's Movement for Good awards, which is giving £1million to charities this summer.

The funds will be used to purchase a sports kit and equipment which will allow the young people to compete in district competitions with their own unit’s branding.

Currently they do not have their own kit so this will allow them to be easily identified and maintain their sense of pride in their team.

Members of the public were invited to nominate causes close to their hearts, with 500 gifts of £1,000 available for donation.

Ruth Verner, Chairperson of Ballymena Sea Cadets says: “We are delighted to have been chosen as one of the winners of the Movement for Good awards.

“Our purpose is to promote the development of young people in achieving their physical, intellectual and social potential.

“We also provide access to education and training which allows them to obtain nationally recognised qualifications such as B-Tec and Duke of Edinburgh awards.

“We are incredibly grateful to those who nominated us for this award.”

Mark Hews, Group Chief Executive of Ecclesiastical Insurance Group, says: “We would like to thank every single person who took the time to nominate a good cause as part of our Movement for Good awards. Ecclesiastical, the fourth largest corporate donor in the UK, is a unique financial services group.

“ We are owned by a charity which means all available profits can be given to the good causes that are so important to our customers.

“As a company whose purpose is to contribute to the greater good of society, charitable giving is at the heart of our business.

“We know that £1,000 can make a huge difference to the incredible work that charities do and we’re looking forward to seeing how this financial boost will change lives for the better.”