Mabel says farwell to 'The Adair' after long career 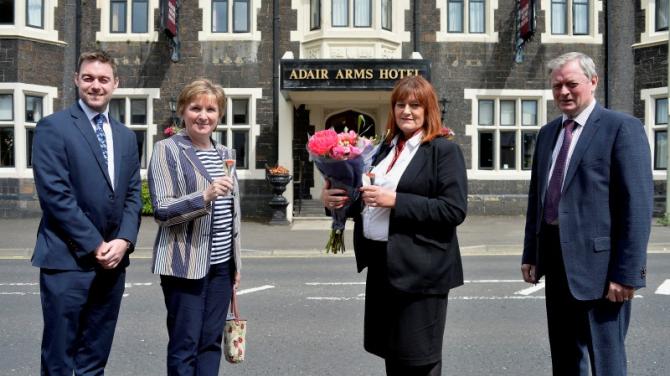 FOR almost a quarter of a century, Mabel McKeown has been a familiar face to the clientele of Ballymena's famous Adair Arms Hotel.

In fact, Mabel, who retired last week, often referred to the town centre venue as her 'second home' with many of the customers and guest becoming her personal friends over that time.

After leaving her previous career as a beauty therapist, Mabel successfully applied for the role of receptionist at 'the Adair' and she's never looked back since. Over her 24 years, she has fulfilled virtually every role in the hotel - she has greeted customers at the front desk, acted as duty manager and in more recent times she's boosted the hotel's business thanks to her close relationships with visiting tour groups.

"You have to be a people person to do this job," admits Mabel. "To be honest, I felt the Adair Arms was my theatre and it was up to me to perform to the audience!"

And Neil Gordon, assistant manager, says Mabel was 'more than capable in every role'.

"I've worked with Mabel from the very beginning and I know just how much she loved working here. There's a great buzz about the place because it is right in the town centre and Mabel knew every regular by name."

For Mabel that personal touch was essential to ensure the business continued to grow.

"I suppose the advent of so many foreign tour groups really highlighted to need for top class personal service.

“This was really a major factor when the tour groups from China began to come to Northern Ireland. Game of Thrones really boosted that market. People were coming from all over the world but China was the new emerging tourist factor. I became acquainted with a Chinese tour operator called Sandy Zeng and we really hit it off. We spoke regularly - none of these email exchanges - as a result, Sandy knew I would have everything that her groups needed well catered for and the Adair became a regular fixture on the itinerary."

As a travel lover, Mabel admits she can be a bit obsessive when it comes to visiting other hotels./

"You can't help yourself," she laughs. "You're always making comparisons and learning new things whe you go to other hotels."

And with her duties done at the Adair, Mabel is very keen to catch up on her passion for travel and she is hopeful that the covid pandemic restrictions will enable her to reach some of her chosen destinations.

But for now, she just wants to say a fond farewell to her second home and to the thousands of customers who she's met down through the years.

"I've met some famous people - from Graham Norton to Ronan Keating, Ant and Dec plus a great many more but my motto was to treat every customer the same and I've been delighted to do that all through my time here," she said.