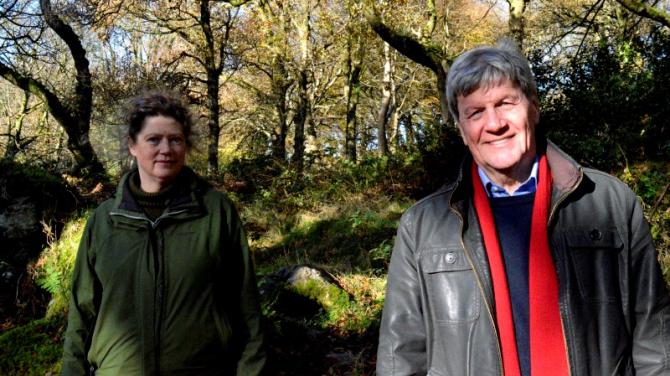 The series, which see Joe travel the highways and byways of Northern Ireland starts on Monday 5th July and runs for 18 episodes.

The series kicks off with a visit to Glendun in the Glens of Antrim, where he meets artist Katy English, who owns Cregagh Wood.

As far back as 30 years ago Joe Mahon was producing the UTV series “McGilloway’s Way”, whose presenter, Olly McGilloway, is still fondly remembered by many people throughout the country.

Since then Joe himself has become the front man for the many and varied television productions that Westway Films has brought to the UTV screens over the years, Lesser Spotted Ulster, Ulster Giants, Lough Neagh, Lough Foyle, Lough Erne, to name a few. And the consistent popularity of those programmes would suggest that he has built up a strong rapport with the UTV audience. He is now a familiar figure who is trusted to deliver fresh insights across a wide range of subject matter and to do so with enthusiasm and genuine enjoyment.

“Mahon’s Way” is as much about Mahon’s way, his style of presentation if you like, as it is about the travels he undertakes - down-to-earth and humorous, yet well-informed and erudite, always with an eye for the quirky, the unusual and the eccentric.

Whether we’re talking about “Lesser Spotted Ulster” or “Lough Foyle” or “Ulster Giants” one of the hallmarks of that style, constantly commented upon in audience feedback, is the relaxed and natural tone of Mahon’s interaction with contributors. That spontaneous “natural feel”, the humorous tone and the abundance of “craic”, often tend to disguise the fact that these are programmes of real substance, with a serious approach to local history and heritage based on proper field research and considerable scholarship.

“Yes, I’m beginning to get the hang of it,” jokes Joe, “so I’ve finally relented and decided to call it “Mahon’s Way”, with a respectful nod to the memory of my old friend and mentor, the late Olly McGilloway. The new title means that we’re not confined geographically, so you could find us popping up well-nigh anywhere in the country, - from the lakes of Fermanagh to the Glens of Antrim, from the shores of Lough Beg to the coast of County Down, and even as far away as the Belfast Hills!

“It’s been a difficult year at times dealing with Covid 19 restrictions but, apart from getting used to some creative social-distancing, we’re confident our audience will enjoy these programmes as much as ever – perhaps even more so given the circumstances!”