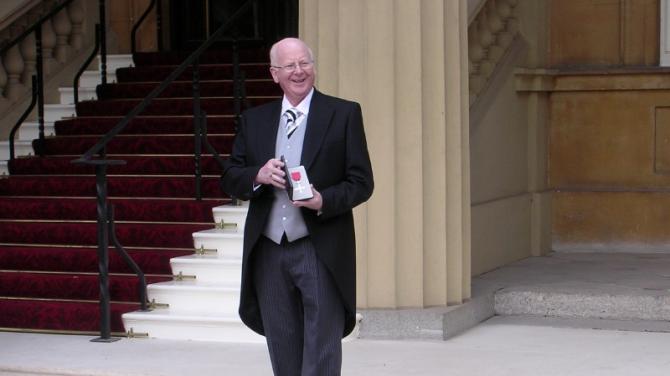 Bannside Councillor, Alderman Tommy Nicholl MBE, has thanked the people of the area for their loyalty and support during his 40-year career in local government, after he was presented with a prestigious award from outgoing Mayor of Mid and East Antrim, Councillor Peter Johnston.

Alderman Nicholl, who was first elected to the former Ballymena Borough Council in May, 1981, said he was ‘humbled and honoured’ to receive a special certificate from Councillor Johnston in his last official engagement of his Mayoral term.

“I have fought 11 elections over the course of 40 years as a councillor and have been privileged to represent the Bannside constituency throughout all of that time.

“The people of the area have remained loyal to me and I am deeply appreciative of that support.

“I have a great love for the Bannside people and I have been proud to lobby and campaign on their behalf on a wide range of issues, from roads, to health and education.

“It was an honour for me to serve as Mayor for two terms, during 2000/01 and 2005/06, and to be able to work for all the people of the Borough, across all sections of the community.

“In my role as Mayor during those periods, I endeavoured to make people feel valued and encourage a sense of community togetherness.

“I have made so many friends from all sides of the community over the last 40 years and that comes from the philosophy that was enshrined in my DNA.

“We have a lovely wee province and a lovely wee Borough of Mid and East Antrim, and I want everyone to feel part of it.”

Alderman Nicholl paid tribute to his strong religious faith and thanked his family and friends for their support.

“My wife, Ellen, was only 44 when she died, but my sons, Raymond and Norman, and the many wonderful friends I have made throughout my life, have given me such support and joy.

“I am truly grateful to every one of them for being by my side throughout the last 40 years.”