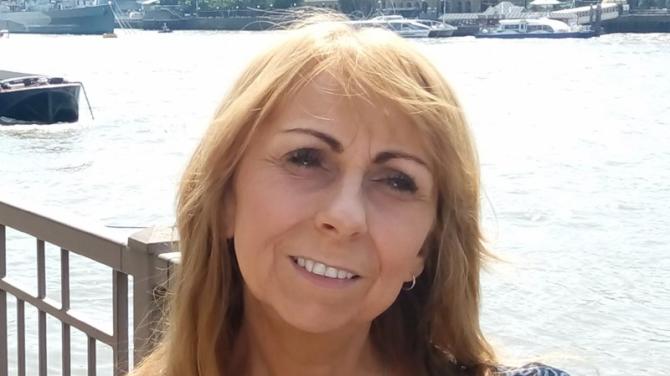 TRIBUTES have been paid to popular English teacher, Edwina Beattie who passed away suddenly earlier this month.

Mrs Beattie, orginally from the Ballymena area, was reported missing on May 12, with her body being subsequently discovered later that day in the Portrush area following a multi agency search that included HM Coast Guard, PSNI, Community Rescue Service and RNLI.

Edwina is the wife of historian Keith Beattie. The couple lived in Ballymoney.

A service of thanksgiving took place in St. Patrick's Parish Church, Ballymena on May 18

Edwina was born to Edward and Mae Scott on 25 September 1968 in the Cottage Hospital, Ballymena. As a young girl she went to the Four Towns Primary School, Ahoghill and later attended the Ballymena Academy. Eager to pursue a career in education, her excellent A-level grades took her to the University of Ulster, Coleraine where she proudly left with a Postgraduate Certificate in Education in English with Drama in July 1991.

She began her teaching career at St. Joseph’s Secondary School, Coleraine that September. A few weeks later, she met her future husband, Keith Beattie, at a pub quiz in the Harbour Bar, where they both lived in Portrush.

They married on 13 April 1996 in the First Presbyterian Church, Ahoghill. The reception in the Adair Arms, Ballymena was a party that Keith & Edwina frequently recalled and, except for the curse of lockdown, they would have enthusiastically repeated it on their 25th wedding anniversary in April 2021.

After four years teaching at St. Joseph’s, Edwina was promoted to the position of Head of English, aged only 26 years old.

Over the next 25 years, she became a favourite teacher for many of her pupils. Young people who would ordinarily have struggled were nurtured through texts by Shakespeare, Orwell or Heaney towards a grade which often far exceeded their expectations.

At St. Joseph’s, she helped to stage the hugely successful Christmas musicals. Those outstanding performances of Wizard of Oz, Grease, Fame and Calamity Jane have become wonderful memories for all the former pupils, and staff, who brought them to the stage in the packed assembly hall.

Edwina committed her entire life to helping young people grow and achieve their potential. Without a young family of her own, she sponsored children in Malawi. She kept every single letter and picture that she received from the girls and boys; she never met them but cared for them deeply.

She loved the work of William Shakespeare. The house in Millgrange was crammed with copies of his plays and various biographies, textbooks, reference books, pictures, theatre posters, badges and t-shirts and anything conceivably linked with the Bard. For over ten years, the highlight of her summer was trip to London for a day spent in the stalls at Shakespeare’s Globe Theatre to watch an authentic performance of one of her favourite works, while Keith sat quietly beside her, fast sleep.

Edwina also enjoyed history. She provided professional support and advice for Keith on several of his eventful work projects, helping local communities (young people and adults) to challenge their perceptions of cultural identity. She travelled with Keith to visit places such as Galway for Armada commemorations; to Mayo and Wexford for 1798 commemoration events and to Edinburgh with the “Lads an’ Lassies of the Tapp” to learn about pipers in the First World War. She became a popular visitor wherever she went, even being introduced to Taoiseach Enda Kenny on a visit to Castlebar.

She was devoted to her family and had become even closer to them during lockdown. Every Sunday, she would be gone for most of the day spending time with her mother, father, sister, nephew, nieces, great nephews, and often uncles and aunts. Those were very special times, although they could never replace the regular get-togethers before lockdown where four generations of the Scotts would often go to a local restaurant and enjoy the companionship and of a loving family.

Edwina was greatly loved and an important part of Keith’s family. She was daughter-in-law to David and Jennifer and sister-in-law to Colin and Adrian and their families. As Jennifer had also been a teacher, both she and Edwina always had plenty to talk about and set the teaching world to rights on many occasions.

Edwina’s family would like to take this opportunity to say a heartfelt thanks to the volunteers, officers and staff of the PSNI, Coast Guard, RNLI, Community Rescue Service and NI Ambulance Service.

After Edwina passed away suddenly on 12 May 2021, her niece, Amber Scott (21), delivered this emotional tribute to a tearful congregation at her Aunt’s funeral service in St. Patrick’s Parish Church, Ballymena.

“Edwina was the most beautiful person inside and out. Her generosity and kindness never failed to amaze me. She always cared so deeply and loved unconditionally. No problem was ever too big or too small for her to handle. She was our rock and helped us through the hardest of times.

“Edwina was more than Aunt to me and my sisters, Natasha and Tamsin, and my brother Nathan. She was our friend first. She was someone we laughed with, shared secrets with and confided in. Most importantly, she was someone who was always there for us, night and day.

“Even after 30 years of teaching, she was still so dedicated to the pupils and genuinely believed in a bright future for every single one of them.

“When Edwina and her sister, my Mum, Michelle, were growing up, they were inseparable and had the greatest gift – not only were they sisters but best friends. They had an unbreakable bond, caring and looking out for each other over the years. Whether it was a night out in Belfast to watch their favourite musicals or just sitting in the house gossiping with a cup of tea, those are precious moments Michelle will always cherish and never, ever forget.

“Edwina and Keith’s marriage is what made me believe in true love. Whenever she spoke about Keith her face lit up and she beamed with pride. Even after 25 years of marriage, they were just as infatuated with each other as the first day they met.

“She never let a day go by without checking-in with her parents, Eddie and Mae Scott, in Ahoghill. Edwina was the ‘apple of their eye’. She was so compassionate and caring towards them. Nothing was too much trouble. She loved going to see them every Sunday and it was the highlight of their week to be surrounded by their loving family.

“Edwina was an incredible and beautiful force of nature and we will never let the world forget that.“ I can only hope to be half the woman she was.”