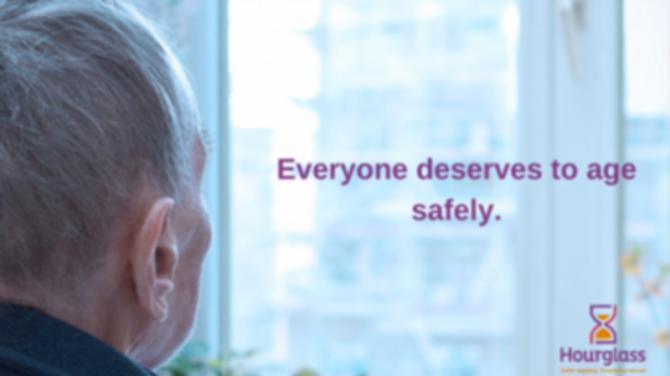 One quarter of older people in Northern Ireland experience abuse, according to the Hourglass charity.

One third have felt more vulnerable to abuse and neglect during lockdown, Mid and East Antrim councillors have been told.

Speaking at a remote meeting of the council’s Direct Services Committee on Tuesday evening, Lauren Cunningham, from Hourglass, also said that just 89 per cent of people regard abuse of older people as a problem and one fifth do not see pushing or hitting of older people as abuse.

Hourglass is one of few charities to focus on abuse and neglect of older people.

This is defined as “a single or repeated act or lack of appropriate action in a relationship where there is expectation of trust”.

Abuse can include physical, psychological, financial, domestic, sexual or neglect.

The charity says that most abuse is carried out in community settings or by family members.

Thirty-one per cent of calls to Hourglass are to report domestic abuse by victims aged over 75 years.

The charity says that the abuse of older people is not a new issue but one that has now reached “a critical threshold that can no longer be ignored, nor tolerated and is working to have an Adult Safeguarding Bill, bringing Northern Ireland in line with legislative protections across the wider UK”.

Speaking at the committee meeting, the council’s Dementia Champion Alderman Gerardine Mulvenna said: “My stomach is churning with those statistics and how older people are being abused and treated by members of their own family. It is absolutely shocking.”

She offered the council’s support to raise awareness and “get the message out there”.

Braid DUP Councillor Beth Adger said: “It really disgusts me how some people can treat their parents and abuse them in their own home. It is absolutely disgusting.

“I could never understand how someone could be abusive to their mum or dad.

“The way we were brought up was to respect people and that is how it should be in every home. It is downright disgusting that any child would do that to their own parents.”

Ballymena councillor DUP Alderman John Carson said: “This is really an eye opener. I find it really deplorable and astonishing that anybody should abuse their parents.”

The helpline is confidential and free and the number will not show up on a phone bill.

The charity’s email address is enquiries@wearehourglass.org