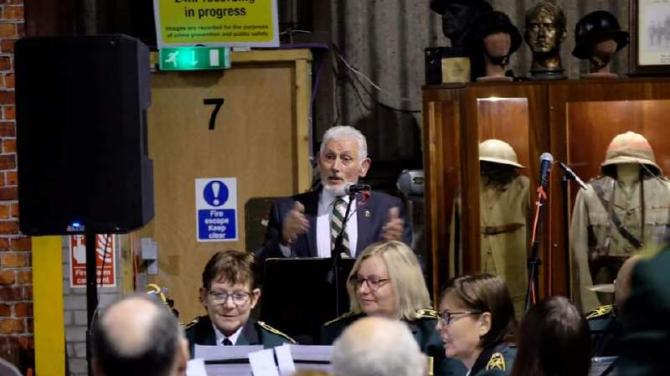 Randalstown man David Gourley, who passed away earlier this month, will be remembered as a devoted student of World War One history and a champion of all those who served in that terrible conflict from across the political and religious divide.

David, who conducted many battlefield tours to France and Flanders, was passionate about the social and military history of the war and the devastating impact it had on the entire island of Ireland.

While his core interest lay with the men of the 36th (Ulster) Division, David always stressed the often forgotten part played by Irishmen in units like the 16th and 10th Irish Divisions.

His devotion to the entire subject and his tireless drive to inform modern generations of the war was reflected in the deep sense of loss felt by all who met him or worked with him on his many talks and projects.

David McCallion of the War Years Remembered museum said: “David (Davy) Gourley had a wealth of knowledge and was inspirational to many over the years through his talks and tours. “The thoughts, prayers and sincere condolences of all at WYR go to the entire Gourley family circle and friends. Stand down, rest easy your duty’s done and thank you for your dedication and service.”

Jim McIlroy of the Ballymena based 12th Royal Irish Rifles Association added: “David had a vast knowledge of the Great War and thousands of people benfited from his insight. At a personal level David was a friend, mentor and adviser to me and I will always be thankful for the times I spent with him both at home and on the Western Front. Thoughts and prayers are with Rita and the family circle. Come to me, all you who are weary and burdened, and I will give you rest. Matthew 11:28 Lest We Forget.”

Ballymena Guardian Editor Des Blackadder who co-wrote the ‘Ballymena and the Great War’ website, said David Gourley was truly dedicated to his subject.

“I had many conversations with David over the years. He was always finding a new angle to explore on the war’s history and those who enjoyed his battlefield tours will be saddened to hear of his passing.”

May 15, 2021 peacefully at hospital. Dear husband of Rita, The Meadows, Randalstown and much loved father of Michael, David and Shauna, father in law of Keli, Pauline and Matt and precious granda of Stephanie, Leah, Lauren, David, Rebecca and Daniel.