Brave Jessica is an inspiration 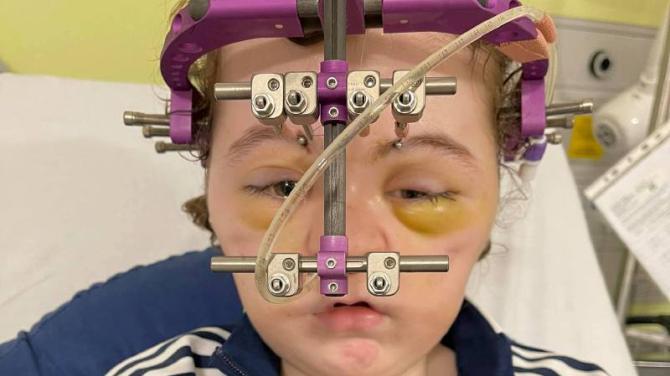 JESSICA Philpott’s battle back from life changing surgery would put many an adult to shame!

This is the view of proud mum Julie who told the Guardian this week that her 12-year-old daughter has coped remarkably well.

“Every day Julie has pushed on with courage, resilience and sheer determination that would put any adult to shame,” said Julie.

It was back on April 26 that Jessica, who was born with Apert Syndrome, a Craniofacial condition that affects the development of the head and limbs, was operated on for 10 hours by a team of 13 highly skilled surgeons, ranging from neurosurgeons to craniofacial surgeons to plastic surgeons, each playing a vital role in the reshaping of Jessica's face and skull.

This surgery carries high risks, risks that they were all too aware of due to the fact that surgeons were operating so close to the brain.

Julie explained that distraction of Jessica’s face started on Tuesday, May 4, and the plan is to continue with this twice a day for 2-3 weeks.

“We are already seeing a massive difference to the structure of Jessica's face and she is loving the change and has shown such grace and dignity throughout the last 2 weeks, we are immensely proud of her,” said Julie

No chat with Julie or Jessica is complete with a mention of the Slemish College pupil’s beloved Ballymena United!

Meanwhile, the surgery that Jessica has just had is actually one of, if not the most expensive surgeries in the world!

“Great Ormond Street Hospital has fully funded this surgery for Jessica and we cannot thank them enough for what they've done for Jessica and I during our stay here so far,” said Julie.

“Not just the surgeons, nurses and medical team, but also the auxillary staff, domestic staff and catering staff, they all play a vital role and have been a tremendous source of support and encouragement to us as a family. It truly is a wonderful place and there is nowhere else I'd rather be at this stage of Jessica's Journey.”

Jessica also asked her mum to share pictures of her with her frame on, saying it will give people the chance to see what she looks like now.

Mum Julie recalls the day of surgery, describing it a “bit of a blur” for her.

“The Team came to the Ward to see me. Professor Dunaway, the lead surgeon, was smiling, they all were. He said they were finished and all went exceptionally well. I sobbed, happy tears, tears of sheer relief that it was over. He went on to say that there had been absolutely no complications. In fact Jessica had 'sailed' through the surgery. She hadn't even needed a blood transfusion which is almost always a 'given' with this type of surgery. The team advised that it would be another two hours before Jessica would be in recovery.”

Julie said those last two hours “were definitely the longest of the day.”

“Around 7pm the nurse took me to recovery, nothing could have prepared me for what I was about to see. Jessica bruised, swollen and had wires, tubes and drains everywhere. But there in the middle of it all her little voice said "Mummy can I have something to eat,” recalled Julie.

Mum explained that over the next seven days they had “good days and not so good days.”

“But the staff on the High Dependency Ward were nothing short of amazing. They looked after me as much as they looked after Jessica. They actually made us feel like we were the only family on the ward, They are very special people who go above and beyond every day for families like ours.”

Jessica has amazed staff, surgeons and family with her recovery.

On Day 3 Professor Dunaway told Julie in his entire career he has never seen a recovery like it, describing it as “amazing.”

“I replied "Our God is amazing", it really has been nothing short of a miracle,” said Julie.

As the week progressed the Surgical Team gradually informed Julie of what they had done in theatre.

They explained that because Jessica was coping so well under the anaesthetic, they decided to do a little bit extra to ensure that Jessica had the best possible outcome from the surgery.

“They didn't just fit the frame as planned, they bone grafted her a new nose, they gave her a cheek lift and plated her forehead. So, in light of all of this it made her recovery even more of a miracle,” smiled Julie

“It also re-iterated to me that these surgeons are very special people, who go above and beyond on a daily basis for children like Jessica. They want the very best for them and they will do everything in their power to improve their quality of life. Thank you just doesn't go far enough, we will be eternally grateful to that Team.”

Husband Lawrie was able to join Jessica and Julie for the weekend - “to help us with the move”, quipped Julie.

“We’ve managed to accumulate quite a bit of ‘stuff’ over the last seven days, but it was horrible having to say goodbye.”

Julie reports that Jessica has started to eat and drink more orally so not requiring as many tube feeds, swelling is going down gradually and continuing to improve daily!

Regarding her frame, the screws will be turned twice a day for the next few weeks, gradually changing the shape of Jessica’s face.

Mum Julie is always very mindful to thank all those who have sent texts, cards/gifts and prayed for them.

“It has been absolutely amazing and were so thankful to have the first week done with no major complications. As someone said to me ‘first week done , a road never to be traveled again’.

“It was tough, there were tears (lots of them). There were good days, there were not so good days but we’ve done it and know that God was with us and will continue to be with us in the days and weeks ahead,” said Julie.

And Julie makes no secret of the fact that faith has got her through this very challenging time.

“Obviously our faith has been a major factor in how we, as a family, have been able to cope with all of this. And the outpouring of prayer, practical and emotional support from our own church, Ballyloughan Presbyterian, Connor Presbyterian where Jessica attends GB and Youth Club and Woodlands Presbyterian in Carrick who have 'adopted' us, along with many other churches and individuals from every denomination has been special. And we would like to thank everyone who's been praying and offering practical support, it has meant so much to us and it has been wonderful to see so many people 'being the church'.”

Julie said they had every faith in the Surgical Team, and “and more importantly we knew that Jessica and that team were covered in prayer leading up to and for the duration of the surgery. Churches of all denominations, individuals and groups of people from all faiths had prayer rotas going throughout the day, and so we had a peace about this surgery from the outset.”

Indeed, a verse of scripture that was very poignant in the week leading up to this surgery was Isaiah 41:10 - ' So do not fear, for I am with you, do not be dismayed, for I am your God, I will strengthen you and help you, I will uphold you with my righteous right hand'.

“This verse was in my head as I walked out of the anaesthetic room that morning, it was the most difficult thing I have ever had to do. But I knew that God was in complete control and would carry Jessica, the team and me through that day and in the days to come,”said Julie.

The Jessica's Journey Facebook and Instagram pages have been a real source of encouragement to them as a family over the last couple of weeks.

“We currently have 160.5K followers and so I think we have achieved our aim of raising awareness of Craniofacial conditions. The comments, well wishes, prayers and support of thousands of people on the page have carried us through the dark days - thank you to each and every person who's taken the time to comment or message, you really have made a difference and you have restored our faith in humanity,” concluded Julie.