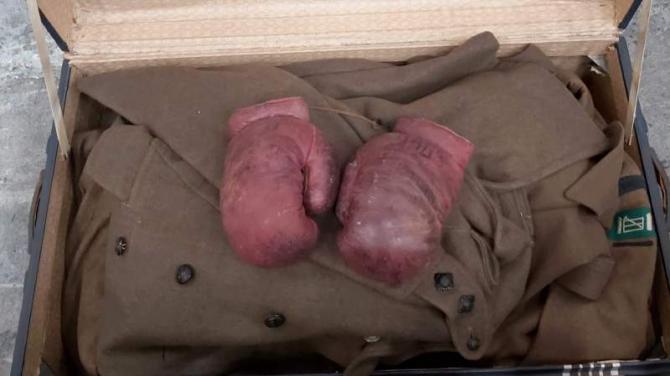 THE boxing gloves worn by the Ballymena man who ‘put a world champion on his a..e are just one of many local items which have been donated to the closure threatened ‘War Years Remembered’ Museum in Ballyclare.

The man behind the museum, well-known military history enthusiast, David McCallion, is facing a heartbreaking potential closure at the premises with income drying up due to covid restrictions.

David, well known in Ballymena and Antrim, has set up history displays all across these areas over the years.

But the pandemic is threatening to shut down his display in Ballyclare which has been visited by many hundreds of locals.

David is desperate to keep the museum going and to keep the collection together so the many items can be visited by future generations.

“It’s not just about hardware and uniforms although we’ve got plenty of them,” says David. “Many of the items are highly personal but they tell some wonderful stories.

“Sam was in the Royal Ulster Rifles. He played in the band and as Bugler Henry, he was the regimental boxing champion.

“He was wounded in Italy and he also fought in the Korean War.”

Local photographer Norman McCaig, a great friend of Sam’s took a picture of the Queen Street man getting presented by the Korean attaché with his medal beside the Korean memorial that was in St.Patricks barracks.

Norman’s son Gordon recalls: “He was so proud of that photo, that I don’t think there was anybody in Harryville who didn’t see it. That’s how he gave me the boxing gloves which I passed on to David for the museum.

“Sam boxed under the name Al Summers, and was a formidable fighter. When Rinty Monaghan the world flyweight boxing champion died in 1984, Sam,(who was the gate security guard in Flexibox at the time) brought in a cutting detailing Rinty’s career in the ring. He had written on it “Al Summers was the only boxer to put Rinty Monaghan on his arse!”

Even after he retired, Sam was back in Flexibox helping out round the place.

It was a rite of passage that he showed the apprentices in Flexibox his war wound. He was raked by machine gun fire up his left leg, up into his groin area, which he would show anybody at the drop of a hat!

Gordon adds: “At the Christmas dinners that Flexibox had in the Adair arms, he refused the offer of a free ticket for him and his wife, and did doorman well into his eighties. He really was a great character much loved in the Harryville area.”

The collection at War Years Remembered spans over 100 years of military and social history during the greatest two impacts of the twentieth century, The Great War and The Second World War. War Years Remembered has grown over the years, from a not for profit organisation to a registered charity. Its final goal is to find a permanent home and seek registered museum status.

War Years Remembered is not a state-run museum. Due to the various lock-downs over the past year the museum has suffered greatly, with almost all of the annual income lost.

All through lock-down the team at War Years Remembered has continued to support anyone requiring research from documentary makers and authors to families and veterans, all for free.

David McCallion is hopeful that he can recover from these losses but he desperately needs support from the local community.

“To survive and remain in our present location, we currently need to raise £50,000. With this money we can continue our vital work in remembering our veterans and the collection will be preserved for the education of future generations.”

Please give what you can, please help save War Years Remembered.Paste this link in to your web browser to go to the fund raising page.