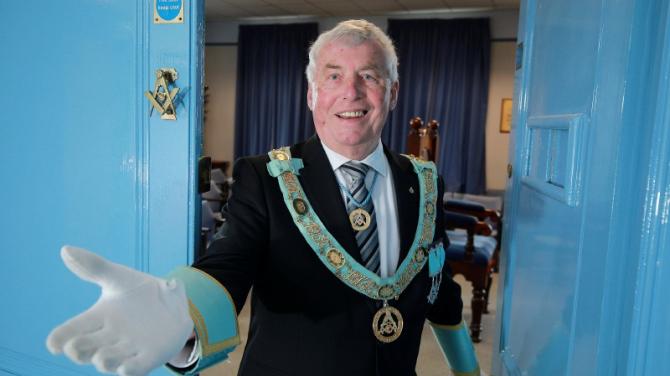 Freemasonry has given 4,500 Antrim men a lifeline during lockdown - and they want to make it known that their doors are open for new members and are keen to show the active role they plan to play for men in future society.

John McLernon, Provincial Grand Master of the Provincial Grand Lodge of Antrim explains: “This organisation has served as a lifeline for me and so many over the past 12 months and we need to let others know about what we do and how we can help.

“As Freemasons we look after each other by checking in, keeping in regular contact and by helping others in our community.”

There are approx. 21,000 members of the Grand Lodge of Ireland and approx. 4,500 in the Province of Antrim alone.

The Provincial Grand Lodge of Antrim recently conducted a survey amongst its members of which 832 responded. The findings were on the whole very positive and prove that being part of the Freemasons has had a positive effect on their mental health and provided regular social interaction to many during the pandemic, cementing their role in a post-Covid world.

John continued: “We always try to identify any problems within the Fraternity, such as loneliness or feelings of isolation.”

“This tells us we have some work to do and will ensure that we make further contact throughout the lodges and make an extra effort to extend the hand of friendship where it is needed most.”

“The friendship offered, the sense of belonging, has been crucial for so many of our fellow Freemasons over the past year in particular.

“There is no doubt in my mind that we have a central role to play over the coming years to men of all ages.

“We are now keen to ensure that we let people know what we do, dispel any myths and invite them to find out more about what we do and consider joining us if they feel like it is something they would like to be a part of.”

What have we learned most from this pandemic?

“As human beings we need social interaction. We need other people.

“We need friendship, people, a sense of belonging.

“Everything else is consequential.

“I have had plenty of time to reflect over the past year about my role in the Freemasons. Why do I enjoy it so much? Why is it the most important thing in my life outside my family?

“It boils down to one thing. It is the friendships I have made over the past 40 years.”

“That is why I joined the organisation when I was 21 years old. And why I have enjoyed it for so long, and what has helped get me through this past year.

“I have made life-long friendships and I want to now help other people who are feeling lonely and in need of friendship and a sense of belonging, to get in touch with us and consider joining.”

“Social interaction is something which is integral to any organisation, but one I feel that we excel at.

“Typically, with men specifically, as we get older and take on more responsibilities at work and home, we typically have less time for shared social activities outside of our family unit, which can be isolating.

“The Freemasons offer a social support network where we (in normal circumstances) meet regularly, are in regular contact with each other via phone calls, text messages, social events and even away-trips.

“What is undoubtable is that being part of this organisation has led to my better mental health.

“So often, prior to retirement, after a hard day’s work, I went to my meetings and it certainly improved my mood and made me feel happier. It gave me a sense of belonging, a purpose. I came home lighter, more relaxed and with a renewed sense of community.”

It is well researched and proven that friendship is good for your brain health, promotes a sense of safety, belonging and security.

John continued: ”So many questions have been asked over the years as being in the Freemasons is some great mystery. It is no mystery. We are a network of people, connected by a sense of doing good in the world. We meet regularly, we discuss our role in society and how we can make a meaningful contribution.”

Freemasons trace their origins back to the local fraternities of stonemasons, who regulated the qualifications of masons in the 14th century.

Their teachings and rituals are linked to the building of King Solomon’s Temple in Jerusalem and just as the stonemasons progressed through the ranks from apprentice to master, so too do the modern-day member.

“We are an organisation of men, who treat each other, with respect regardless of class, creed, colour or race. It is non-sectarian, non-political and reminds us of the needs of others who are less fortunate than ourselves.

“Our only stipulation on joining is a belief in a supreme being, whatever religion you follow is not and has never been relevant to freemasonry.

In fact, the Freemasons are one of the largest charitable givers in the country, contributing £3.5m to deserving causes in 2019 alone. Freemasons do not only donate money – many hours of volunteer work is undertaken by Freemasons every year.

John continued: “We raise and distribute money to so many different causes both locally and nationally. I often describe us as a gentleman's club devoted to charitable giving.”

“Many people assume that to become a Freemason you have to be invited to join. This is not the case and whilst members may encourage their friends to become Freemasons, there are other ways in which you can join.

If you are interested in receiving more information on becoming a freemason, please visit www.pglantrim.org, and complete the information requested, someone will contact you.