What connects .. Hammer horror, ghostly tales, a random chip paper .. and the 1798 rebellion? 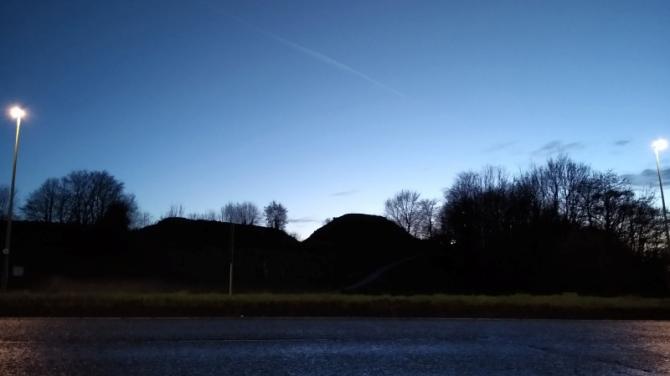 Well, at least in my mind there is. Let me explain.

I grew up on the Moat Road, pretty much right across from the ‘Big’ Moat Hill. Way back then, because we’re talking a lot of years ago, the hill was well covered with huge trees and served as an adventure playground for the children and teens of the area.

Summer days and nights ‘up the Moat’ were great fun. Swings and slides always brought a crowd and games of chasing and hide’n’seek were always taking place. In truth, I don’t think I could have chosen a better place to grow up.

But in the depths of winter, the Moat Road could be scary place for a kid who loved ghost stories and tales of the supernatural.

And if you grew up in Harryville, you were absolutely certain to have been told the tale of the ‘notorious outlaw’ and 1798 United Irishmanl Thomas Archer who met his inglorious end in truly gruesome fashion at the Moat Hill.

With those trees creaking and bending, outlined against a November moon, you hurried up towards home at double quick pace! In the best spectral tradition, you imagined the skeletal tree limbs were just reaching out to grab you and trail you away to some undefined netherworld.

And so, in my mid-teens, along with two compadres who shall remain nameless, I ‘juked’ into an X rated Hammer Horror double-bill at the long defunct State Picture House. From fading memory, I think it was Frankenstein followed by the wonderul Christopher Lee as Dracula.

After the show, we headed home along the dual carriageway with my mates walking straight on towards Chichester Park East whilst I (in order to show my fearlessness) turned off at the road bridge and began the ascent to the twin hills on the ridge brow.

Now, with a teenage mind already well fillled with an evening of vampires and monsters it was pretty much a cert that walking up through the hills was going to be a mental challenge. I did all the usual things. I turned around constantly in the belief I was being followed but there was no-one there.

Having looked one way, I spun round to keep my eye on those trees and their sinister, clutching branches. And did I hear a rattle of chains? Or was that just the wind moving the swings in the playpark, once the site of Wright’s Cottage?

By the time I reached the top of the hill my pace was getting faster and faster and to be honest I was regretting my bravado.

Steeling myself, I set off at a race through the gap between the two hills, the trees croaking like ghouls in the wind which had picked up considerably.

With the terror mounting I literally flew over the high fence, leapt down from the wall and vaulted over my dad’s immaculately manicured hedge.

As I did so, a white apparition flew towards me. It was shapeless, swirling and out to get me.

I screamed in terror as the white shape hurled itself into my face.

The front door flew open and my dad appeared, demanding to know what was going on.

And believe me, it’s hard not to feel like a complete plonker when you have to tell the family you were frightened out of your wits by a random chip paper from the Dolphin.

And that, dear readers, is my personal intro to the story of Thomas Archer and the 1798 Rebellion!

OVER the years Thomas Archer has been branded, depending on various viewpoints as a rogue, a rebel or a mixture of the two with a healthy added dollop of Robin Hood thrown in.

In more recent times, tales of his utterly gruesome final moments have been the source of local ghost stories - and, truthfully, his ending was straight out of a Hammer Horror feature.

Archer was born in Castle Street, Ballymena only a matter of yards from the town's centre.

Like the majority of the town's population, he was a presbyterian. Apparently he was an apprentice shoemaker and, as such, it was not unusual that he had enlisted in the Antrim militia - a locally raised unit loyal to the crown

However, when the 1798 rebellion broke out he deserted from his regiment to join the rebels who occupied Ballymena on 7 June 1798.

Archer was apparently prominent in the fighting and with his basic military training he would, no doubt, have been a valuable asset to the rebel forces.

After the collapse of the rebellion, his position as a militia deserter meant he could expect no mercy from the authorities who were scouring the countryside in search of those who had taken sides against the crown.

Over the next two years, it is said that Archer led a gang of eight or ten associates in the Ballymena area, robbing, torturing, raping and killing loyalists, houseburning and attacking Orange halls ‘from Ahoghill to the Braid and from Connor to Rasharkin’.

According to some sources, the Archer gang received support from among the local population who sheltered them and 'prevented the authorities from acquiring intelligence of the rebels’ movements'.

In some accounts, Archer's motives are described as 'more political than criminal'.

From this viewpoint, he and his associates were trying to raise the people to begin a new rebellion.

His decision not to flee overseas may have reflected his hopes for a new insurrection and 'an unwillingness to leave his parents, to whom he was greatly attached'.

Archer was betrayed by an associate and captured on 3 March 1800 in the Star Bog near Ballymena, being severely wounded in the struggle.

According to tradition, there were few informers in the district as everyone knew that the life of even a suspected'traitor' would be in imminent danger but eventually one of Archer's most trusted friends betrayed him

James O’Brien lived at of the Star Bog, about a mile and a half from Ballymena and Archer frequently visited at his house.

There he believed he was secure - but O‘Brien,a chandler by trade, was induced to sell his friend out.

Arrangements were made with a shopkeeper residing in Ballymena as part of the plot.

He was told that when he received a half crown bearing a secret mark, no matter by what means conveyed, it was a sure sign that Archer was under O’Brien’s roof and that circumstances were favourable to his capture.

The shopkeeper was to forward the half crown to the Military authorities with the relevant information.

Accordingly, one evening after darkness had set in, a woman, totally ignorant of the plot, went to the shop and paid with the half crown bearing the secret mark.

In less than half an hour a military contingent, under the charge of Captain Dickey, was on the move in the direction of the Star Bog to James O’Brien’s house with the aim of making Archer their prisoner.

Archer appears to have been in the habit of sleeping without undressing, with loaded arms by his bedside, so as to be ready for an emergency.

On the night in question he was suddenly awakened by the son of O’Brien, who was unacquainted with the plot, exhorting him to fly for his life, as soldiers were approaching the house.

At once realising his danger, Archer rose, seized his pistol, and rushed away although he was lightly wounded as he escaped.

Archer succeeded for a time eluding pursuit, and baffled all efforts at capture. After fruitless searches in different parts of the neighbourhood, the movements of a water spaniel which accompanied one of the Military attracted special attention.

It soon became evident that the dog was aware of the presence of something unusual, and which the soldiers were not aware of, being at the time by the side of a deep hole in a bog.

The restlessness of the spaniel led to closer investigation, when the dim outline of a suspicious object was observed in the distance, which, on further research, proved to be the head of the hunted outlaw just above the surface of the water.

Archer tried to fire his pistol but it transpired that O’Brien had added insult to treachery by wetting the powder and putting a nail in the touch-hole of his victim’s weapon; consequently Archer found himself completely at the mercy of his captors. He was at once conveyed to Ballymena, bitterly regretting that he was then in the power of a man whose life he could have taken on three separate occasions.

Archer was subsequently tried by court-martial on March 5 1800, found guilty of treason, and sentenced to ‘death, dissection and the gibbet’.

It was at first decided that he suffer on the Moat, but in deference to Archer’s own wishes, a tree standing near was decided upon, and he was conveyed there on a wagon.

When all arrangements for the final scene was completed, he attempted to address the multitude who had gathered to witness his last moments.

He just managed to blurt out: “If all had kept their secrets in their breasts as I have done” - when a dozen muskets were levelled at him.

Legend says he met his fate ‘with an unsubdued spirit’.

His body, after hanging a sufficient length of time, was taken to a building in the Castle demesne, where it was disembowelled, and then hung in chains on the Moat as a reminder to others of the ‘undesirability of rebelling against the Crown’.

When time had bleached the bones, and when the country had become quiet a number of young men took upon themselves the responsibility of procuring a coffin, in which they placed the remains, and secretly buried them in the parish churchyard.

In all, the Ballymena court martials tried over 100 men in the post rebellion period: 16 were executed, 16 flogged and transported, 23 went into voluntary exile, and 10 were condemned to serve in the army or the fleet. This marked the virtual end of organised United Irish resistance in Antrim, although there was a recurrence of gang violence around Ballymena in 1801, involving ‘the same people who harboured Archer’, and there were ineffectual rebel gatherings at the time of Emmet's rebellion in 1803.

By the time the author of 'Old Ballymena' put pen to paper in mid 1800s, local presbyterians looked back on the role of previous generations in the rebellion with a sense of bewilderment mixed with contempt. When the rebellion in the far south had descended into a sectarian civil war, the northern protestants decided that their loyalties lay with the crown first and foremost.

Tom McCaughren's children's story, In search of the liberty tree (1994), tells the story of Davison and Archer.

McCaughren unveiled a plaque in December 2002 at the Moat commemorating Archer and eight other United Irishmen hanged on the same spot. The Mid-Antrim Historical Society organised the ceremony and both unionist and nationalist political representatives attended.