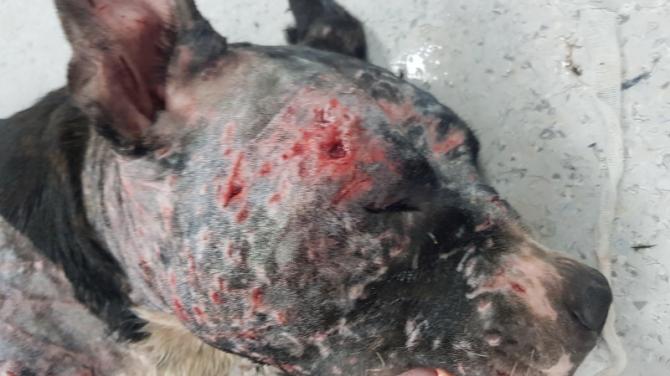 BALLYMENA Court has heard how a woman caused unnecessary suffering to her two Staffordshire Bull Terriers, Jock and Jack.

The charges were brought against Ms Claire Lines from Circular Road area Larne.

She was sentenced at Ballymena Magistrates’ Court on Wednesday 24 March 2021, after being found guilty of charges brought by Mid and East Antrim Borough Council under the Welfare of Animals Act (NI) 2011.

Proceedings followed an investigation by Council’s Animal Welfare Officer, who was contacted by a local vet with concerns for injuries to a dog, Jock, brought in by Ms Lines in September 2019.

Ms Lines informed the vet that the injuries had just been caused when her dog was attacked by an unknown Labrador.

The vet found the injuries to be days old, and when treating the dog found a significant number of older healed injuries. This dog was taken into the Council’s possession. A search was made under warrant at Ms Lines’ address a few days later and a second dog, a Staffordshire Bull Terrier called Jack, was found to have similar untreated injuries. These injuries, she alleged, were sustained the previous day when playing with a stick.    This dog was removed from Ms Lines and examined by the vet who noted in a statement provided to the Council:

“This dog presented with recent wounds and older wounds on his body.

“His left eyelid was red/inflamed, he had a recent small wound on his nose, a red/inflamed right ear with recent scrape wounds from dog nails.

“On the inside of his right foreleg there was a deep scrape wound and the leg was swollen as well as the chest muscle, he is lame on this leg also, putting weight on but painful. He also had a broken right upper canine tooth.”

Veterinary evidence suggested that Ms Lines allowed the dogs to suffer by her delay of seeking veterinary care for the seriously injured Jock, and the complete lack of treatment for the injuries sustained by the second dog, Jock. On 24 February 2021 Ms Lines contested the charges, and was found guilty of Causing Unnecessary Suffering to the dogs under Section 4 of the Welfare of Animals (Northern Ireland) Act 2011.

On 24th March 2021, Judge Broderick imposed a 4-month custodial sentence, suspended for 18 months, and ordered Ms Lines to pay £400 cost. She is disqualified from keeping dogs for 5 years.

A spokesperson for Mid and East Antrim Borough Council said on conclusion of the case:

“Council gives a high priority to the welfare of domestic pets and horses and operates a rigorous enforcement policy to ensure full compliance of regulatory requirements. Complaints are investigated thoroughly and where necessary formal action is taken, which may include the service of Improvement Notices, or in extreme cases, seizure of animals.  The Council may also prosecute for offences such as in this case which I hope serves as a warning to anyone who does not take appropriate care of animals.”