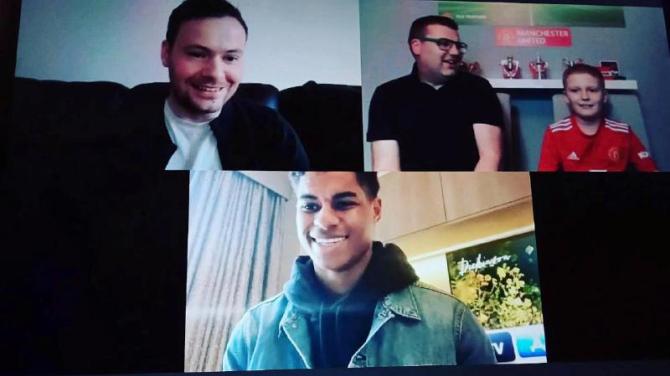 BALLYKEEL Primary School pupil Ben Dickinson got the surprise of his life when Manchester United and England star Marcus Rashford joined him in a Zoom call to discuss his fund raiser for Northern Ireland Children’s Hospice!

Ten-year-old Ben, and his dad Andrew, were on Sky Sports News last Monday to talk about his 26 miles challenge - unaware that Rashford was waiting in the wings.

After asking if the striker would run one of the miles with him, presenter Paul Gilmour asked Ben what would he do if Rashford was about to sit down in front of them?

The striker appeared on the Zoom screen and a stunned Ben and Andrew were completely speechless!

Rashford told Ben he was “very, very proud of him.”

“You should be very, very proud of yourself and I'm sure your family are proud of you,” said the Man U star.

“It's bringing me great joy to see you do the things you're doing. I'm rooting for you and I hope you do well.”

Meanwhile, Ben’s March Marathon for NI Children’s Hospice, was his own idea.

The Primary 6 lad was inspired to do the challenge by Rashford, who was awarded an MBE last year after urging the Government to allow around 1.3m children in England to claim free school meal vouchers in the summer holidays during the Covid-19 pandemic.

Reflecting on the meeting with Rashford dad Andrew said it had still not quite sunk in.

“I still cannot believe that it happened,” outlined Andrew.

“Ben is level headed and has not let it go to his head.”

Andrew said Ben is thrilled to have met Rashford - but his main priority is hoping that the public give generously to the NI Children’s Hospice.

At the end of the Sky Sports interview Ben asked Rashford for a signed shirt!

Dad Andrew said Ben is looking forward to it taking pride of place on his bedroom wall.

“The very fact he's getting a shirt will kind of be a reward for him after all the hard work he is putting in at the minute to raise the funds,” said Andrew.

“I'm quite proud that he's going to have something to remind him of that in the years to come.”

Following the Sky Sports interview, Rashford shared the moment on Twitter and wrote: “My guy Ben, what a hero.”

In Ben’s fund raising appeal for NI Children’s Hospice he explained that with no sports taking place due to lockdown he wanted to build up his fitness by doing some running - and set himself the target of running 26 miles during March.

“Being inspired by how Marcus Rashford had helped people in lockdown I want to raise some money for other kids in Northern Ireland who are sick,” outlined Ben.

“Please help me reach my target by donating to the Northern Ireland Children’s Hospice by visiting www.justgiving.com

/benjiballer5. I will keep you updated with my progress on my instagram page - Benjiballers5.”

And in a Zoom class last Wednesday Mr. Fisher chatted with Ben about his once-in-a-lifetime experience with the Manchester United star.

Mr. Fisher alerted the staff and parents about Ben’s March Marathon and donations were forthcoming. “As a school we are very proud of Ben and wish his fund raising, for a very worthy cause, every success,” said the teacher.

Ben is also receiving support from his hometown club Larne FC, with midfielder John Herron joining him on some of his runs, while the entire squad will run with him on his final day this Friday March 26.