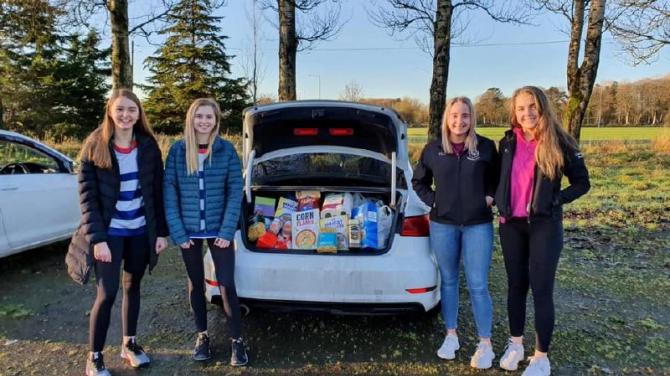 AFTER the news was announced that Northern Ireland would be going into lockdown, the YFCU turned to online platforms such as Zoom and Facebook in order to help continue the event calendar as best and as safe as possible.

The use of these online platforms meant that young farmers were still able to communicate and take part in meetings and events.

Despite the lockdown, members were determined to keep busy and so the club got involved in community initiatives to help support the locals.

Members offered support to local pharmacies and helped to deliver prescriptions for the vulnerable and those who were not able to leave their homes.

As well as this, the YFCU were creating wonderful virtual competitions to keep everyone’s spirits and mental well-being high.

The club took part in the ‘Spy a Rainbow’ challenge to help colour the local area, bring positivity throughout the community and show support for the NHS.

The next competition got members litter picking their local area as part of the Big YFCU Clean Up Challenge.

Members found socks and mainly recyclable things in their clean up and one member was able to fill two bin bags in just a one mile stretch!

Due to the shortage of toilet roll during lockdown, members thought it would be humorous to take part in the Toilet Roll Challenge.

This video can be found on the club’s Facebook page and shows members trying to get that all important toilet roll to a very desperate member.

In July, the club made a video as part of the YFCU’s virtual competition, ‘Best Club Video’.

The club were delighted to have placed 1st in this competition. This video is available to watch on the club’s facebook page.

August 2020 was a romantic one as Rachel Gillespie married Daniel Rea.

The club held lots of online committee meetings to discuss the upcoming winter programme and came up with many ideas in order to protect members.

In September, club meetings were allowed to take place provided risk assessments were carried out and approved and the current restrictions allowed them.

The club had their first meeting of the winter programme on the 15th, which was a night of ice breaker games and bingo.

Despite the ability to recruit, due to the pandemic, being limited, Ahoghill YFC were delighted to welcome new members into the club.

The club also presented ‘Friends of the Cancer Centre’ with a cheque of £2,305 from fundraising done the previous year.

October saw the wedding of past Club Secretary Lucy Hurrell and past Club Treasurer Jason Benton.

Both club meetings this month were held on Zoom.

The first meeting was held by the Grassroots Challenge and spoke about environment issues.

The following meeting was a farm safety talk, from one of the YFCU farm safety mentors, Lynne Montgomery and also a talk from Club Secretary, Kathryn Speers on her international exchange to Canada.

Members from the club also participated in the Public Speaking heats for County Antrim.

Club Secretary, Kathryn Speers got through to the finals and came overall 3rd in the 21-25 age category.

With in-house meetings on the horizon, committee members got ready for this opportunity.

The YFCU provided the club with safety posters to display and hand sanitizers.

The club also got a face mask for each member and a hand sanitizer foot pumps.

Since the club’s relaunch in 2011, club meetings have always been held in a local primary school however since the changes brought about by the COVID-19 pandemic, the club has relocated to a local hall.

In November, the club was delighted to have their first face to face meeting.

It was the club’s home management competition which seen members create a centrepiece for a post-COVID dinner party using only recyclable materials.

They also had to make dinner invitation and a menu.

The club ensured social distancing was adhered to and members were required to sit with other family members.

As for December, it was back to online meetings.

The committee decided to hold ‘The Great Ahoghill Bake Off’.

Members had to bake their best cupcakes under the instructions of member, Catherine Chesney.

The cupcakes were judged by Fiona Speers on appearance and not taste, much to Fiona’s dismay.

The club were able to hold a litter pick in Portglenone Forest with the Grassroots Challenge in order to secure their Bronze Eco award in December.

The club also donated to the President’s Appeal which was to gather as many items for Ballymena Food Bank as possible.

The Co. Antrim Floral Art heats took place and seen Lucy Hurrell get through in her age category to the N.I. finals.

In the last meeting of 2020, members watched a Christmas movie, ‘Christmas with the Kranks’.

Last month, members held their Annual General Meeting and would like to congratulate the new office bearers taking up their roles in April.

The members thought this was great opportunity to get active from the comfort of their own homes.

In February, the club held a Pancake Party on Zoom in order to celebrate Pancake Tuesday.

They have just announced their chosen charity for 2021 which is NHS Charities Together.

Despite the restrictions and the differences this has meant for young farmers, Ahoghill YFC thinks this year has been one to remember.

The YFCU has come up with new ways of doing things; new online competitions with record participants and clubs have got even more involved in the local community.

Ahoghill YFC is excited to see what the rest of 2021 holds.