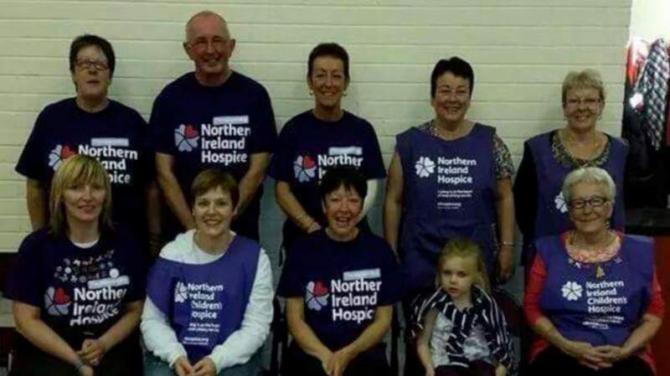 RLG CARBOOTERS in Ballymena have brought their total amount of money raised for Northern Ireland Hospice over the years to a stunning £50,000!

The fund raising venture was set up in memory of Richard Lee Gibson (RLG), who passed away on October 6, 2013, aged just 34.

Richard’s father, Sloan, thanks all customers, stock donors, monetary donors, neighbours and family members, too numerous of name individually, for their assistance helping them reach this stunning amount.

“Without everyone’s help we could not have done this,” said Sloan. “We are so grateful to everyone who has contributed throughout the years. All the money raised is going to a very worthy cause, the Northern Ireland Hospice. The work they do is precious and they need all the money they can get to keep going,” outlined Sloan.

Back in December 2013 Sloan’s daughter Carrie-Ann and daughter-in-law Lisa Gibson, decided to hold a car boot sale, with proceeds going to NI Hospice.

And it took off since then, although Covid-19 has put the brakes on carboot sales and money coming in.

“Being unable to attend carboot sales we rely on customers visiting our Facebook page, RLG CARBOOTERS and Facebook Marketplace,” pointed out Sloan.

Recently a lady from Glasgow purchased four model boats from Sloan - and took the total amount of money raised since the launch of RLG CARBOOTERS to a remarkable £50,000.

“Patricia McCartney, a lady from Hillington East, in Glasgow, purchased four model boats from us for her adult autistic son,” said Sloan.

“These boats were part of a donation of bric a brac, footwear etc, from the family of the late David Elliott, from Wakeurst Park, in the town. Sincere thanks to the Elliott family circle and also Patricia for helping us to reach this fantastic milestone.”

Sloan, and his wife Ann, intend continuing to help others through raising funds Hospice.

“We applaud everyone who has supported us, and urge you all to keep on doing so,” said Sloan.