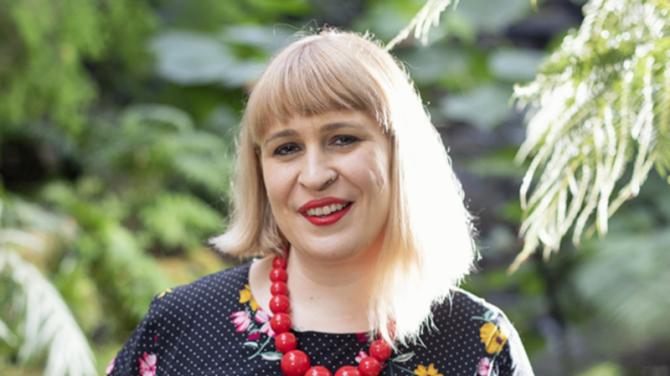 LOCAL author, Jan Carson, admits she was delighed that a few ‘pure Ballymena’ accents were part and parcel of a recent radio dramatisation of her latest book ‘The Last Resort’.

The book, due out on April 1, is a series of 10 interlinked stories set in a caravan on the north Antrim coast.

The stories were commissioned by BBC Radio 4 and combine Jan's dark sense of humour and social observation.

They’ve been described as charming, eye-opening and sometimes painfully sad as we see each tenant of the caravan park struggle with their own private dramas.

The Last Resort observes the dynamics and diversity of the Ireland we live in today, with Jan exploring complex family dynamics, ageing, immigration, gender politics, the decline of the Church and the legacy of the Troubles throughout the stories.

Jan wrote short stories on the back of postcards for one of her last short story collections.

During the pandemic, she began this practice again, and sent stories to isolated members of the community.

Through this, she has struck up a friendship with an elderly man, living and isolating alone in Belfast. These stories eventually became The Last Resort, making him the first reader.

“I’m probably more proud of this wee series than anything I’ve turned my hand to before. It was not the easiest thing to write.

“All ten stories were written in less than eight weeks, at the height of Lockdown, in isolation, very far from the coast.

“I was extremely grateful to receive inspirational help from a bunch of wonderful artists who posted me hand drawn pictures of the caravan park I was writing about.

“I don’t think Seacliff (the fictional park) would ever have come to life in my head, if I hadn’t mapped it out on my dining room wall.

“I loved these stories before the actors got their hands on them. They’re little slices of the North coast I grew up with. I hope they’re familiar to a lot of you.

“They help me navigate the weirdest summer and feel a little less alone. When the final recordings came back, I was absolutely blown away by how the programmes had turned out.

“It’s a really humbling experience to sit back and listen to ten strangers take your ideas to a place where they seem richer, realer and a hell of a lot funnier, than they were inside your head. I think the actors made something truly remarkable out of these stories, and I want to make sure they get due credit for their creativity.

“These are all brilliant, talented and lovely to work with people. Please send lots of work their direction).

“Whilst it’s absolutely run of the mill, to watch or listen to UK-wide BBC programmes where every accent is an English accent, it is almost unheard of, to encounter a series which solely showcases Northern Irish talent. I’m particularly delighted to have brought a couple of pure Ballymena accents to the production.”

Jan Carson is a writer and community arts facilitator based in East Belfast.

A micro-fiction collection, Postcard Stories was published by the Emma Press in 2017.

Jan’s novel The Fire Starters was published by Doubleday in April 2019 and subsequently won the EU Prize for Literature for Ireland 2019.

The Sunday Times described her as 'One of the most exciting and original Northern Irish writers of her generation.’

Her work has appeared in journals such as Banshee, The Tangerine, Winter Papers and Harper’s Bazaar and on BBC Radio 3 and 4. In 2018 Jan was the Irish Writers Centre’s inaugural Roaming Writer in Residence on the trains of Ireland. She is the 2019 recipient of the Jack Harte Bursary. Jan has curated the CS Lewis Festival, the Hillsborough Festival of Literature and Ideas and the inaugural Belfast Lit Crawl.

She specialises in arts engagement with older and people living with Dementia and has received funding through Queen’s University Belfast to carry out a research project into the representation of Dementia in literature.

She has facilitated creative writing workshops for the University of Ulster, Irish Writers Centre, Dublin, John Hewitt Summer School, West Cork Literary Festival and many other universities, festivals and organisations.