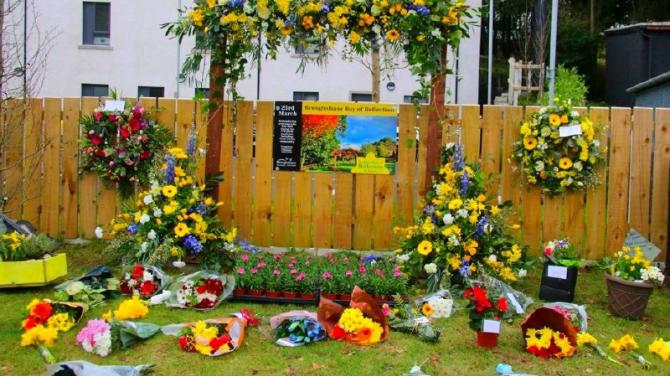 The community of Broughshane have played their part in a ‘day of reflection’ to mark one year since the start of the first lockdown.

In the past 12 months many thousands of people across the U.K. have died of Coronavirus.

A National Day of Reflection co-ordinated by Marie Curie was organised and this brought the U.K. together to stop, reflect and remember those who lost their lives to Coronavirus.

Volunteers from Broughshane and District Community Association decided to organise their own tribute.

Chairman Lexie Scott told the The Ballymena Guardian: “Valued members of Broughshane's local community, our voluntary groups, cultural organisations and places of worship came together and laid flowers at our ‘National Day of Reflection’ site at Broughshane’s old police station in remembrance of everyone who had died during the past year”.

Mr. Scott continued, “We were overwhelmed by the support we received from so many families and community organisations who came to pay tribute and offer their support by laying dozens of freshly cut bouquets of flowers. So many of us were unable to attend funerals in the past 12 months, Tuesday gave those a chance to stop, reflect and pay their respects to all those we couldn’t mourn”.

Broughshane and District Community Association spokesperson, Sandy Wilson went onto say, “There are still tough times ahead but with the successful rollout of the vaccine across Northern Ireland we in Broughshane, ‘The Garden Village of Ulster’ and across the Braid Valley look forward to much brighter days ahead”.