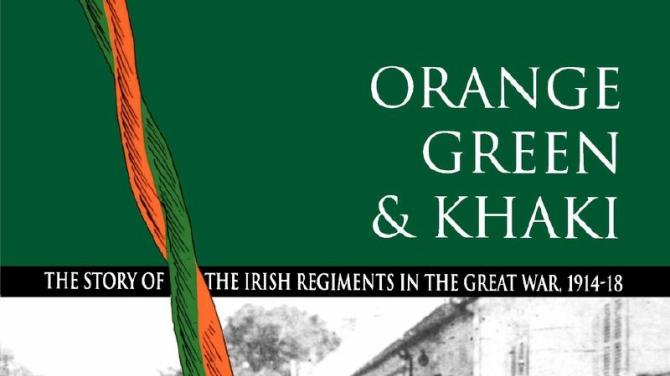 NOWADAYS, the word Panzer is closely associated with the stunning success of Germany’s Blitzkrieg tactics in the early years of World War 2.

But it was actually the British who first pioneered armoured warfare in World War One with their German counterparts slow to realise the war winning potential of ‘the tank’.

In fact, up until the devastating last year of the war, the Germans mainly used what were known as ‘Beuteopanzers’ - captpured (or ‘booty’) British tanks.

However, in March of 1918, the monstrous A7V tank of the Germans’ own design was used for the first time in the maelstrom of the ‘Kaiserschlact’ - the gargantuan offensive which threatened to destroy the Allies.

And right in the path of the first of these German tank attacks were men from Ballymena and district serving with the 12th Btn of the Royal Irish Rifles - originally known as the ‘Central Antrim Volunteers’.

It’s another little bit of military history which Ballymena can claim to have played a part in!

The early tactical success of the German army onMarch 21 can be measured in the casualty figures for the 12th Royal Irish Rifles.

Total killed and died of wounds on March 21 were just four officers and 35 men.

Many of these must have been suffered by the gallant 'C' coy whose story is told below.

By western front standards in a major engagement these are relatively trivial 'fatality' statistics.

A much more accurate picture of the scale of defeat suffered on March 21 can be drawn from the numbers of 'missing'.

In previous engagements, 'missing' had almost certainly equated with 'dead' but, thankfully, on this occasion, the vast majority were taken prisoner by triumphant German troops.

A small number would die from their wounds later but thankfully most would return home safely to their families.

From Orange Green and Khaki by Tom Johnstone

By noon, the redoubts in the forward zone had been cut off and fallen, but certain isolated posts fought on gallantly.

On the right of the Line of Resistance, 'C' coy. 12th Btn Royal Irish Rifles, resisted strongly throughout the day.

On the way, they destroyed a German patrol. Ominously, its presence indicated to Johnston that the Germans had broken through into the Battle Zone.

By 1100 the strongpoints held by A and D companies were captured. Johnston's company held its position in Foucard Trench for four hours.

At times the enemy gained entry and were expelled in bitter hand to hand fighting. An attempt to use a flame-thrower against them at miday was scotched in flames.

Shortly afterwards, the fog suddenly lifted and it became obvious to C company what progress the enemy had made.

From their positions, Johnston's men could see Germans swarming about Jeanne d'Arc redoubt - which held B coy. and Btn. HQ - about a mile to their rear.

Further to the right, German cavalry could be seen advancing through positions which ought to have been held by 14th Division.

Undaunted by the realisation that their own position was now perilous, they struck hard at the enemy with Lewis Guns and rifles. In minutes the column of men and horses was a mass of destruction.

The Germans reacted swiftly and attacked the compnay from both flanks.

The Company Commander ordered a withdrawal to Lejuene trench 500 yards behind. The enemy followed up fiercely and with great courage,a single German with bayonet fixed charged the position.

This incident clearly demonstrated the offensive spirit of the attacks.

C Coy. was joined by the Btn foward headquarters from Le Pontchu Quarry.

Numbering nearly 120 men, it fought on resolutely. In mid-afternoon, a German company appeareed marching along in fours. Fire was held until the last moment. Then concentrated rapid fire annihilated the enemy.

Surrounded, the end for C coy. and for Johnston's men came quickly about 1600 when a tank appeared down the main road, taking the trench in enfilade with machine gun fire while a battalion attacked their front.

The position was hopeless and Johnston, to save his remaining men, about 100, including many wounded, from useless slaughter, surendered.

His wasone of the most courageous stands that day. After the war, when his exploit became known, Johnston was deservedly awarded the Military Cross.

It must be said that an analysis of the death casualties shows that the resistance of all other elements of the Btn. was not as resolute as that of 'C' company.

A more common occurence is described below:-

"They surrounded us, the whole battalion was made prisoners, I vividly remember smashing my rifle and throwing the bolt away" - attributed to unpublished papers of CSM Samuel McKeever

The tanks which attacked the British infantry defending in and around the quarry near Pontchu-Ferme were A7Vs. Specifically, tanks 501 and 506 of ATD 1.

The other three A7Vs had broken down, either before or during the early phase of the attack on March 21st. It appears to have been tank 506 (Oberleutnant Skopnik) that opened fire on the quarry, using grape-shot at close range. This fire facilitated the work of the German assault unit that attacked on the ground.

Heavy fog - made even denser by gun smoke - made every movement of the ponderous machines hazardous. Whereas tank 501 was safely guided through the German wire entanglement, the following tank 506 lost contact with the leading vehicle and traversed the wire entanglement.

Following 506, 505 got stuck in the wire. Captain Greiff - in agreement with Captain Freiherr Grote - now had all further motion stopped until 11.30 hours, by which time visibility had somewhat improved.

Just as they were about to leave their forming-up place, the three remaining tanks were heavily gassed by enemy gas shells.

No real harm was done, but the crews now had to put on their gas masks, something not really calculated to ease the strain of combat already pressing on these untried men.

After a short while, tank 507 became inoperable because of gear work damage and had to be left behind. But now tanks 501 and 506 closed up with the infantry which until this moment had been checked by scattered but determined enemy resistance.

Seeing the German tanks approach with their sneering skull-emblems painted on the front armour, the British infantry broke. This is something observed on all German tank actions.

At 12.30 hours the two tanks arrived near the Pontchu-Ferme, where a critical situation had just evolved: while attacking it, the German infantry came under heavy fire from a fortified quarry in their rear, which had not yet been detected.

While the infantry was pinned down, tanks 501 and 506 advanced. Several machine gun pits were crushed by them, and tank 506 covered the quarry with grape-shots at close range.

A German assault party now quickly mopped up those who remained alive in the enemy stronghold. Six officers and about one hundred and fifty men of the London (Royal Irish)] Rifles were taken prisoner.

It is thought that the reference to London is due to the existence of a Regiment known as the London Irish Rifles but they were not in this sector at the time. It is possible that after battle reports would have been confused due to the 12th Royal Irish Rifles (like all units at the time) having received drafts of reinforcements from various London units. By this stage of the war, the former ‘pals battalions’ were onlhy a distant memory and the high command re-filled the ranks with little thought for sentiment.

By 14.15 hours, the Pontchu-Ferme had also come into German possession. However, during combat, temperatures inside the A7V tank easily climbed up to and over 140 degrees Fahrenheit, and now, because of total exhaustion of the crews, Captain Greiff ordered a pause of fifteen minutes.

At 14.30 hours, the two tanks executed a fierce assault against the 'Entente-Position', in front of which the German infantry were again pinned down by numerous machine guns and intensive mortar and rifle-grenade shelling. Two companies of ABn 5 and the flamethrower platoon of the Guards Reserve Engineers accompanied the thrust. As the InfReg 128 [history] puts it:

'At this moment welcome support arrived. Two German assault tanks, mobile fortresses similar to English vehicles yet larger, drove rumbling out of the Grugies-Trough and attacked the 'Entente-Position' from the flank.

In a short while, the area had been cleared from all hindrances. We could move on again and immediately advanced... The Tommies now came running in bunches.

The crews of the two tanks had successfully infiladed the enemy with shells and a torrent of bullets. Several trenches were thus rolled up. In some cases, details of the crews even dismounted and attacked strongholds with hand grenades and flame-throwers.'

Thirteen machine guns and a great quantity of other material were captured by ATD 1.

The detachment had now reached its objective and had thus executed its mission successfully.