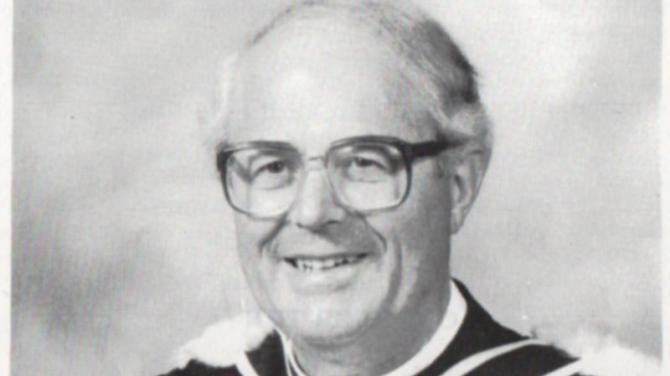 In a tribute Rev. Beattie outlined that Rev. Armstrong was born in Londonderry on February 4, 1930.

He was the son of William and Margaret Armstrong. William had a grocery business in the city and Wilfred grew up helping with the family business.

The family were members of Great James Street congregation in Londonderry and Wilfred was educated at Foyle College.

After school Wilfred studied at Magee University which was then affiliated to the Presbyterian Church.

He graduated from Trinity College Dublin, moving to New College Edinburgh, and finalising his ministerial studies at Assembly’s College Belfast.

Licensed by the Derry Presbytery in 1953, assisted Rev Borland at Hamilton Road congregation in Bangor while still a student, then served an assistantship in Richmond Craigmillar Church of Scotland.

In June 1957 Rev Armstrong was ordained to the ministry and installed minister of Aughnacloy and Ballymagrane congregations in Co Tyrone.

He arrived a bachelor boy, but met a girl from Lisnaskea in the county of Fermanagh, called Valerie Graham, and was married in March 1967.

After 14 years in Tyrone Wilfred received a call to be Minister of Second Broughshane Congregation in Ballymena Presbytery.

He accepted that call and was installed on September 3, 1971.

He was a valued member of Presbytery, Synod and General Assembly fulfilling all duties required of him.

Mr Armstrong was a devoted and faithful Minister.

Preaching faithfully from God’s word he was an encouragement to many, and the means used by God to draw others to faith in Jesus Christ.

In an era when Missions and Youth Coffee Bar were popular, Mr Armstrong was encouraged to see the congregation grow numerically but especially spiritually.

He had a pastoral heart, caring dutifully for all the people.

He was especially particular about names, and recorded names in his memory, to recall in the future.

His pastoral care endeared him to the sick and sorrowing of the congregation and his helpfulness to all was appreciated.

During Mr Armstrong’s Ministry, the congregation carried out an extension to the church hall and extended the centre aisle entrance porch to incorporate a Choir Room on the ground floor and a Session Room above.

A lover of historical facts and figures Mr Armstrong kept careful written and pictorial records of these projects and of other significant in the life of the congregation.

“I am told by Valerie that he had kept a diary since the age of 11, quite a compilation of daily facts,” said Rev. Beattie.

In his Ministry Wilfred was ably assisted and encouraged by his loving wife Valerie, who was known to borrow items from local shops for her husband’s children’s talks.

“There was no use of PowerPoint then nor access to the internet and Google. They traveled together to different world destinations, including manse and pulpit exchanges on a number of occasions,” continued Rev. Beattie.

In 1994, after 23 years of Ministry in Broughshane, Rev Armstrong retired from active ministry and he and Valerie moved to live in Ballymena at Brigadie and settled into the Ballymena congregation of Wellington.

“Retired, but not finished, as together Wilfred and Valerie filled engagements at various meetings sharing their ‘Life Story’. This included coming to our own Sunshine Hour. Mr Armstrong also assisted the Ministry at Ballee for a time as well as many preaching engagements while able,” outlined Rev. Beattie.

“The past few years have been marked by health issues that caused Wilfred to be in hospital on several occasions. Responding to treatment he would return home to the tender care of Valerie. With declining health Wilfred was finally called to his heavenly home early on Sunday morning (February 21).”

Rev. Beattie continued -“As one who was faithful in ministry and in life, he has now entered the ‘joy of the Lord’. With the words of Paul to Timothy he could say, “I have fought the good fight, I have finished the race, I have kept the faith. Henceforth there is laid up for me the crown of righteousness which the Lord the righteous judge, will award to me on that Day.”