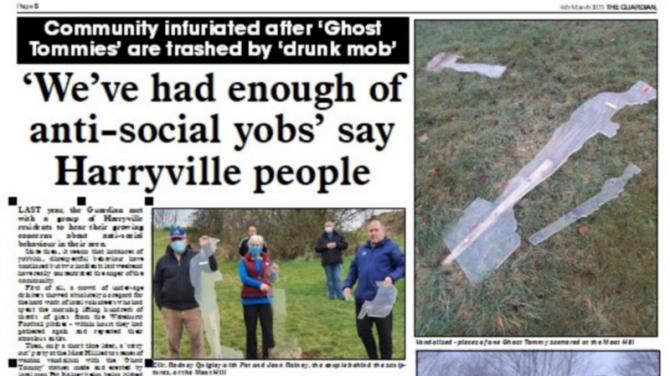 LAST year, the Guardian met with a group of Harryville residents to hear their growing concerns about anti-social behaviour in their area.

Since then, it seems that instances of yobbish, disrespectful behaviour have continued but two incidents last weekend have really concentrated the anger of the community.

First of all, a crowd of under-age drinkers showed absolutely no regard for the hard work of local volunteers who had spent the morning lifting hundreds of shards of glass from the Wakehurst Football pitches - within hours they had gathered again and repeated their atrocious antics.

Then, only a short time later, a ‘carry out’ party at the Moat Hill led to scenes of wanton vandalism with the ‘Ghost Tommy’ statues made and erected by local man Pat Rainey being being kicked down and deliberately smashedup.

The combination effect of these incidents has caused a backlash of anger against the thugs resposible.

With Harryville’s strong community links to the military and especially the area’s sacrifce during World War One, the attack on the Tommies has particularly infuriated locals.

But they have responded positively, with a pay pal me page already set up to raise money for new sculptures at: https://www.paypal.me?EGilmore505 using the family and friends option.

Independent Councillor, Rodney Quigley, who has been lobbying for action against anti-social behaviour in the area for some time said he was dealing with multiple complaints on both issues.

Having helped organise the morning’s litter pick up at Wakehurst he was ‘gutted’ to see teens engaging in under-age drinking in that very area only hours later.

But he says that disappointment turned to disgust and despair when the Moat Hill vandalism became apparent on Sunday morning.

He told the Guardian: “Over the last number of months there has been far too much anti-social behaviour in Harryville especially around the Wakehurst football pitches and Moat Hill.

“Over the last two weekends a crowd of upwards on forty young people have been torturing the the local residents.

“This came to a head last (Saturday) night when the silhouettes of the soldiers on the Moat Hill were completely wrecked.

“This antisocial behaviour has gone on for far too long now and this week I will be meeting with the PSNI and community reps to discuss what can be done to stop this wanton destruction in the Harryville area.

“Most of these youths are of school age and I feel that there is a responsibility on parents to know where their children are as on many occasions cars are seen dropping them off.

“Can I remind parents that we're in the middle of a pandemic and that essential travel only is permitted and large outdoor gathering are prohibited.

“I would encourage anyone who has information as to who was involved with the antisocial behaviour to contact myself or PSNI so that it can be brought to an end.”

In relation to the ongoing situation at Wakehurst, he warned that the thuggish behaviour could lead to ‘very serious injury to players’.

“Last weekend glass bottles were broken on the football pitches at Wakehurst again and a police car window was also broken when one of the crowd threw a bottle.

"This came after a great effort from local football teams and community groups who went out on Saturday morning to clear Wakehurst football pitches. This effort was mounted after reports of a group of youths holding a party around the pitches and dugouts last week leaving the area strewn with rubbish and broken glass.

“Obviously the antisocial behaviour and under age drinking is a great worry but equally worrying is the fact that these youths are breaking glass bottles and throwing the glass onto the pitch which could lead to footballers sustaining a very serious injury. Also the fact that people regularly exercise their dogs on the pitches, if a dog stands on the glass it could be fatal to the animal. I would ask that anyone taking part in this sort of behaviour to think about the seriousness of their actions before they do it again.