Why apprentices are driving the future for Wrightbus 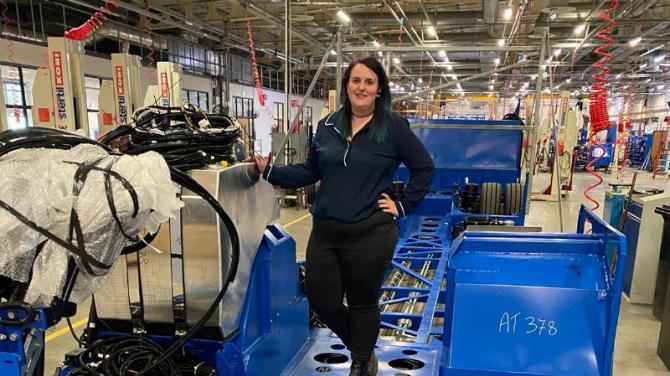 BALLYMENA Bus manufacturer Wrightbus is taking on 19 apprentices as it looks to build the workforce of the future.

The 19 new apprentices will join a team of 12 apprentices that already work at its Ballymena factory.

He joined the firm 30 years ago as an apprentice before working his way up through the ranks.

With National Apprenticeship Week (Feb 8-14) in full swing, he revealed Wrightbus had plans to expand the number of apprentices even further in the future.

“We’re proud to say our apprentices are playing a key part in driving the business forward,” said Mr McLeister.

“We eventually want to have up to 15 per cent of our workforce on an apprenticeship, via our Engineering Technology Higher Apprenticeship programme and our general Apprenticeship NI scheme.

“The benefit to the business is huge. We know that if we’ve trained them, they’re working in exactly the way we need them to - they’ve not picked up any bad habits from elsewhere, so you end up with a workforce that’s bespoke for your business.

“They bring new blood, bags of enthusiasm and a fresh approach to problem-solving.

“And because they’re already up to speed with some of the latest technology thanks to their college studies, they come armed with new skills that can be readily utilised in the business.”

Wrightbus apprentices receive on the job training, working alongside a highly skilled workforce who often act as mentors, along with a college day release programme to back up what they’re learning.

Mr McLeister said apprenticeships offer an alternative way into the workforce for many people.

“In recent times, there’s been a huge emphasis on university education, and while degrees and higher level qualifications are great, they simply don’t suit everyone.

“Our apprentices get the best of both worlds - on the job training, with regular theoretical education.

“We find they’re able to understand the theory better because they’re putting it into practice every day.

“Our industry has faced many challenges and changes over the past decade.

“While at times the bus manufacturing world has been tough, it’s meant that the industry has had to embrace change and really look to innovation to ensure we’re building coaches and buses fit for the 21st century.

“That’s why it’s a more exciting time than ever for apprentices to get involved, with hydrogen and electric vehicle technology evolving at breakneck speed.

“And as an apprentice, they’re really able to be hands-on and contribute to the innovations that are constantly taking place.

“By working on such cutting edge technology, they’re not only driving the green economic recovery, but also helping the UK to achieve its zero carbon ambitions.”

He added: “I’d recommend an apprenticeship to anyone who will listen, and I should know, having stared out as one all those years ago.

“I joined Wrightbus in July 1990, one of two apprentices taken on that year. Throughout my apprenticeship I gained valuable experience in the business and saw first-hand the great strides the company was making so in terms of bus manufacturing.

“The foundation I received as an apprentice and the relationships I formed - some of which I still hold to this day - were invaluable.

“I firmly believe that by joining as an apprentice and having the drive, determination and courage to take the opportunities afforded to me by a progressive company gave me much more of a scenic journey and I can look back proudly of a career filled with opportunity and legacy.”

The firm’s chassis quality manager, Leeanne Stewart, aged 29, is a fellow apprentice who has also moved up through the ranks.

“I started with Wrightbus in 2010 as an apprentice coach builder in the body factory,” she said. “I now have a team of 12 people and am responsible for all the parts coming in and chassis going out of the door.

“Apprenticeships are a great way to learn how the world actually works in practice.

“I was academic and had done A Levels before joining Wrightbus. But I knew I wanted to be an engineer, and the best way to learn the trade is to get hands on.

“I physically know how to build a bus and how all of the parts go together, which is vital in my role.

“ I couldn’t have got that from education alone, seeing it all in action means the theory makes more sense.

“The company has really looked after me since I joined and not only put me through my apprenticeship, but has also enabled me to continue to go on to do a degree in mechanical manufacturing engineering since then and I’m extremely grateful.

“I’d tell anyone considering an apprenticeship to go for it – it could change your life.”