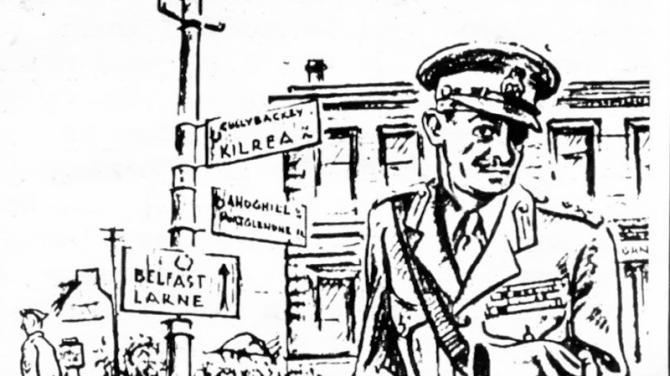 BALLYMENA has payed host to its fair share of brave men down through the years.

We’ve had winners of the Victoria Cross, heroes of Wellington’s brutal campaign in Spain and onwards, right  through World War One and Two.

But it’s a fair bet that 99% of local people will never have heard of our connection with Sir Adrian Carton de Wiart, who, quite frankly, makes Rambo look quite a boring character!

He may only have been associated with Ballymena for some months at the beginning of World War Two but he seems to have made a significant impression on locals.

And that’s not surprising, considering he was a one-eyed, one-handed war hero who fought in three major conflicts across six decades, surviving plane crashes and PoW camps.

His story reads like a comic book of yesteryear.

Carton de Wiart served in the Boer War, World War One and World War Two. In the process he was shot in the face, losing his left eye, and was also shot through the skull, hip, leg, ankle and ear.

In WW1 he was severely wounded on eight occasions and mentioned in despatches six times.

Having previously lost an eye and a hand in battle, Carton de Wiart, as commanding officer, was seen by his men pulling the pins of grenades out with his teeth and hurling them with his one good arm during the Battle of the Somme, winning the Victoria Cross.

"His story serves to remind us that not all British generals of WW1 were 'Chateau Generals' as portrayed in Blackadder. He exhibited heroism of the highest order.

It says much for Carton de Wiart's character that despite being one of the most battle-scarred soldiers in the history of the British Army, he wrote in his autobiography: "Frankly, I had enjoyed the war."

He was born into an aristocratic family in Brussels on 5 May 1880. In 1891 he was sent to boarding school in England, going on to study law at Oxford.

In 1899 he saw the opportunity to experience his first taste of war. Abandoning his studies, he left for South Africa to serve as a trooper in the British Army during the second Boer War. As he was under military age, wasn't a British subject and didn't have his father's consent, he pretended to be 25 and signed up under a pseudonym.

It was a baptism of fire which ended with him receiving bullet wounds to the stomach and groin, necessitating a return to England. Although eager to get back in the mix again, he had to wait more than a decade to experience further front-line action.

At the outbreak of WW1 in November 1914, Carton de Wiart, now naturalised as a British subject, was serving with the Somaliland Camel Corps, fighting the forces of the Dervish state.

During an attack on an enemy stronghold, he was shot in the arm and in the face, losing his left eye and part of his ear. He received the Distinguished Service Order (DSO) for his exploits.

Speaking in 1964 Lord Ismay, who served alongside Carton de Wiart in Somaliland, described the incident:

"He didn't check his stride but I think the bullet stung him up as his language was awful. The doctor could do nothing for his eye, but we had to keep him with us. He must have been in agony."

"I honestly believe that he regarded the loss of an eye as a blessing as it allowed him to get out of Somaliland to Europe where he thought the real action was."

He returned to England to recover in a nursing home in Park Lane. He was to return to this same place on each subsequent occasion he was injured. This became such a regular occurrence that they kept his own pyjamas ready for his next visit.

While recuperating from these injuries, Carton de Wiart received a glass eye. It caused him such discomfort that he allegedly threw it from a taxi and instead acquired a black eye patch.

Such setbacks were not to delay him long. He soon realised his ambition to fight on the Western Front when he was sent to Ypres in May 1915.

During the Second Battle of Ypres, the Germans launched an artillery barrage in which Carton de Wiart's left hand was shattered. According to his autobiography, Happy Odyssey, he tore off two fingers when the doctor refused to amputate them. His hand was removed by a surgeon later that year.

After a period of recovery, Carton de Wiart once more managed to convince a medical board he was fit for battle. In 1916, he took command of the 8th Battalion, Gloucestershire Regiment, and while commanding them at the Somme his legend was cemented.

He electrified his men. The eye patch, empty sleeve and striking moustache, combined with his bravery, made him famous, with men under his command describing his presence as helping to alleviate their fear before going over the top.

During fierce fighting, the battle for the village of La Boiselle swayed back and forth. When three other commanding officers were killed, Carton de Wiart took charge of all units fighting in the village and led from the front, holding off enemy counterattacks.

He received the Victoria Cross, the highest British military award for gallantry, for his actions at La Boiselle. He, however, declined to even mention the medal in his autobiography, later telling a friend that "it had been won by the 8th Glosters, for every man has done as much as I have".

He took part in a number of other offensives during the war, picking up more injuries. Mr A Holmes, who served as Carton de Wiart's "batman" or personal servant, told the 1964 BBC Home Service programme, In Our Time, how his commanding officer had a particularly lucky escape during another Somme offensive.

"They shifted us from Ypres then back on the Somme again to the Devil's Wood, and that's where the old man got shot through the back of the head. But fortunately it missed his spinal cord."

Some historians have contended that Carton de Wiart's bravery at times bordered on recklessness, and that this may have explained his being passed over for promotion to divisional command in WW1.

But Bowman believes there were mitigating factors. "He was a brave soldier and effective leader of men.

“He was well qualified to hold divisional command, but so were many others, and his habit of turning up in the front line and getting himself injured didn't bode well for his ability to manage a division.

"Given the primitive communications of the time, and the amount of bureaucracy involved, commanding a division in WW1 did involve a lot of office time, which didn't seem to be his forte."

Carton de Wiart lived in Poland for most of the inter-war period but his military career was not yet over. When World War Two broke out, he led a campaign in Norway in 1940 and was briefly stationed in Northern Ireland

: Ballymena man, the late John Luke, a keen chronicler of local history wrote of his local Home Guard Unit being inspected by de Wiart in an interview given prior to his death.

He said: “In 1941 at age 16 life was very boring. There were no football matches as crowds were prohibited for fear of air raids.

“There was no television and very few radios which I think I mentioned earlier.

“There was nothing to do after work, so I joined the Ulster Home Guard. It was originally called Local Defence Volunteers — dubbed L.D.V — the Luk, Duk and Vanish Brigade.

“But volunteers were needed as invasion was a real threat. Nobody asked your age (17 was the minimum age for joining).

“Headquarters was in the old Ballymena Academy, now the site of the Fairhill Shopping Centre.

“We trained 2, 3, or sometimes 4 nights a week and every weekend. There was a training ground in the mountains above Cargan (Slievenanee Mountain).

“But because of the large quantity of iron ore in the mountain, the rifle range was very inaccurate. Sights had to be set about 500 yards to hit a target at 200 yards. The magnetic pull of the iron ore affected the trajectory of the bullets.

“Training was really intense. We had training camps in Cushendall and Portstewart — these lasted 2 weeks and you were granted time off work under Emergency Powers to attend them.

“The early ones were under canvass. The last one was in Nissan Huts at Cromore House Estate in Portstewart.

“They were no pleasure camps I can assure you. It was all hard work. A ten mile route march in the morning, exercises on the beach or in the mountains in the afternoon and night training after dark. If you were lucky, bed was about 11.30 pm and up again for breakfast at 6.00 am. You also had to do all night guard duty on a company rota basis.

“By the end of it all the Home Guard was a well trained force capable of giving a good account of itself if need be.

“We fought mock battles against different regiments of the regular army and the American army, usually at weekends.

“A group of umpires were on hand to judge who were winners and who were losers — quite often the Home Guard won. We had the advantage of local knowledge.

“We had a few ceremonial occasions like when Field Marshall Montgomery’s mother came to Ballymena.

“The Home Guard, along with other military personnel, formed a Guard of Honour from the railway station to the Town Hall.

“We were also inspected by General Adrian Carton De Wiart on one occasion.

“He was stationed in Ballymena after his division was pushed out of Norway by the Germans. The Division came to the Ballymena area to re-group and were stationed around the town.

“Their headquarters were in a large house on Galgorm Road where the PSNI Station now stands.”

In April 1941 de Wiart was dispatched to form a British military mission in Yugoslavia, but his aircraft was shot down over the Mediterranean.

After swimming to shore, he was captured by the Italians.

Despite being in his 60s, he made numerous attempts to escape the PoW camp, on one occasion eluding recapture for eight days - quite a feat given his distinctive appearance and lack of Italian.

He was eventually released over two years later and was then sent to China by Winston Churchill to be his personal representative to Nationalist leader Chiang Kai-shek, a post he held until 1946.

Churchill was a firm admirer of Carton de Wiart, describing him as "a model of chivalry and honour" and writing the foreword to his autobiography.

In retirement, he eventually settled in County Cork, spending his time fishing. Having proved indestructible on the battlefield, he died peacefully in 1963, aged 83.

Carton De Wiart was awarded the Victoria Cross for actions at La Boiselle. The Times newspaper carried the following notice on September 11, 1916.

"For the most conspicuous bravery, coolness and determination during severe operations of a prolonged nature. It was owing in a great measure to his dauntless courage and inspiring example that a serious reverse was averted.

“He displayed the utmost energy and courage in forcing our attack home. After three other battalion commanders had become casualties, he controlled their commands, and ensured that the ground won was maintained at all costs.

“He frequently exposed himself in the organization of positions and of supplies, passing unflinchingly through fire barrage of the most intense nature. His gallantry was inspiring to all."

Some information used in this article was gleaned from a BBC article on the subject.