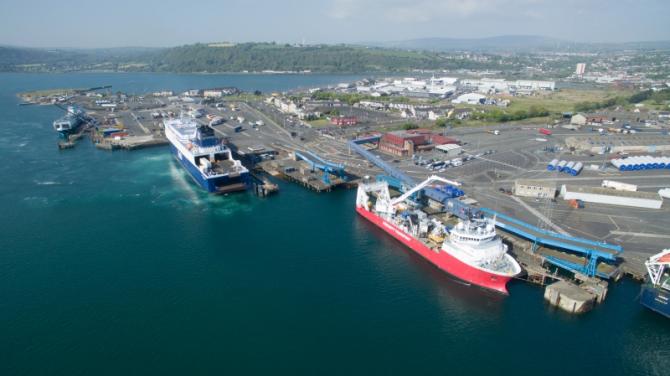 THE DUP have blamed ‘leaks’ for their decision to pull out of a Mid and East Antrim Council ‘problem solving’ forum.

This move came as the confusion and controversy over the ports staffing issue continued to dominate the news with a Stormont investigation into the suspension of checks at post-Brexit border posts in Northern Ireland set to take place .

On February 1, Mid and East Antrim Borough Council and then the Department of Agriculture, Environment and Rural Affairs withdrew staff after claims were made about intimidation.

DAERA staff returned to work on Wednesday with Council staff going back to their posts last Friday.

Members of the Agriculture Committee voted five to three in favour of an inquiry into the Departmental decision today (Thursday).

Confusion and controversy has surrounded the situation from the outset and last Monday, the PSNI Chief Constable Simon Byrne said he had no evidence of a "credible threat" in relation to port staff.

Later that day, Sinn Féin MLA John O'Dowd told the Stormont assembly that the information that led to the suspension of the checks was based on "misinformation" and the staff were used as pawns in a "very cruel game".

Calling for scrutiny, he said some of the information was "simply not true" and that he believed the decision was "calculated and political by the DUP".

DUP MLA William Irwin said staff safety was a priority and that there were "no consequences at all" from the decision to suspend staff, that it was a "sensible decision to make".

After reports emerged that the DUP had withdrawn from party group leaders' meetings of Mid and East Antrim Borough Council, the Guardian contacted the party for a response.

DUP Group Leader Gregg McKeen said, "The Party group leaders meetings are not a decision-making body, but should be problem-solving forum. Unfortunately when details of discussions are leaked it negates the usefulness of this forum.

“If these problems can be resolved we will be happy to resume participation."

Philip McGuigan commented: "This issue is of huge public interest given the furore that has happened as a result of this action.

"The safety of staff has to be uppermost but most people will be left scratching their head that both Mid and East Antrim council and DUP minister Poots ignored the assessment of the PSNI and came up with their own assessment, which now does not seem to be based in fact.

"The chief executive (Mrs. Anne Donaghy) needs to answer Mid and East Antrim council ratepayers and citizens across the north as to how this came about," he said.

Union leaders have also said questions are not being answered around the information decisions were based on.

On Wednesday NIPSA, UNITE and GMB Unions issued a joint call for Mid and East Antrim Borough Council to:-

“ Withdraw the remarks, attributed to the Trade Unions, issued by the Mayor as part of his oral statement to Council at the meeting on February 1.

“We remain extremely disappointed that management have failed to recognise the seriousness of this incident and the likely impact it will have on industrial relations.

“We repeat our call to withdraw the untruthful remarks and advise that suspension of industrial relations is under active consideration.

“NIPSA, UNITE and GMB expect the remarks to be withdrawn and an apology issued.”

A council spokesman said: "Serious concerns were raised to council by a range of stakeholders, including staff, around the safety of workers at Larne Port.

"Council sought a threat assessment from the PSNI and until the level of threat, and credibility of any threat, could be determined by police, council prioritised the safety of its staff and removed them from inspection duties as a precautionary measure."