God praised for a 'little miracle' on Queen Street 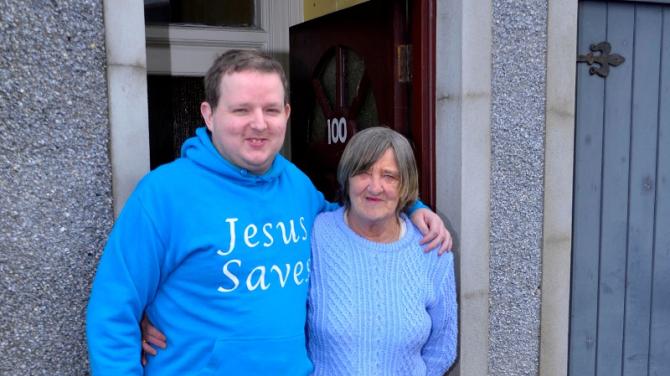 A Queen Street woman who leaves items on a summer seat at her front door for 'anyone in need' says that her 'giving experience' has been rewarded by some wonderful responses.

Doreen Russell, a convinced Christian, follows the Biblical philosophy of ' do unto others as you would have them do unto you' and she says that by following what is commonly known as the 'Golden Rule' she has been blessed in faith.

On a regular basis, Doreen will simply leave some random items such as socks or gloves on her front summer seat.

More often than not they will be gone when she next looks out but Doreen is convinced that it is her way of following the example established by Jesus.

"The idea started after the passing of my husband, Wallace, a few years ago," explains Doreen. "It was a sad time but after a lot of Bible reading and reflection I came up with the idea of trying to help others in some small way."

And since then, the Harryville woman has held fast to that idea based on her Christian faith.

Doreen says she has been 'humbled' by some of the experiences she has enjoyed as a result - especially at Christmas time when the seat is laid out with various toys.

"There are people out there with children who don't have enough money to buy the things they want to give. Some have fallen on hard times through unemployment or just find that their budget for daily living is just too tight.

"From my point of view, I'm blessed to be able to do just a little bit to follow the teachings of our Lord and I get my reward when sometimes I get to see the miracle of happiness on a few little faces," she added.

And Doreen's favourite story about her summer seat is associated with a little boy who was walking past her house one Christmas with his father.

The child spotted the toys on the seat and the pair stopped to look.

"I just happened to be looking out and saw them standing at the wall. I knew they were feeling awkward so I went out and explained why the toys were there. The man told me that he had lost his job and money was pretty tight so I asked the child if he wanted any of the items.

"The wee fella chose a toy car - just a wee cheap thing - and he seemed pleased. He told me really wanted a set of roller blades for Christmas but I could tell from the father's face that the cash wasn't there to pay for such things. Off they went and I never thought much about it until a few days later I came out of the house to find a set of roller blades on the seat.

"That can happen from time to time. People leave stuff knowing it will go to someone who needs it. Other people send me parcels of things to set out and I'd like to thank all those who do so.

"When I saw the roller blades I was amazed and I was even more amazed when the man came up to the house that day and told me that something had spurred him to come by.

"I pointed at the roller blades and the look on that man's face was wonderful to see. I believe it was the Lord working in mysterious ways and for me that is the best reward," says Doreen.

You can join Doreen and her son David, a near neighbour, on a regular basis as they enjoy fellowship and 'a wee Gospel song or two' on Facebook Live.