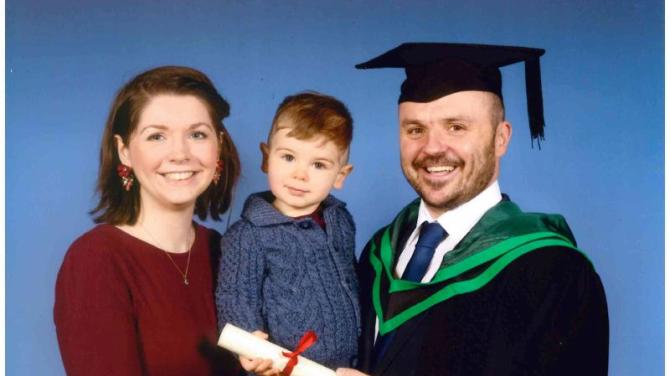 A mature engineering student has been awarded the prestigious Dayle Smyth Endeavour Award for his outstanding performance at Northern Regional College in Ballymena.

Chris McConnaghie, who is employed as maintenance manager with SDC Trailers in Toomebridge, completed the Foundation Degree in Electrical and Electronic Engineering with distinction at the College.

He is currently doing a BEng (Hons) degree.

Originally from Ballycastle Chris now lives in Antrim and is married with a young son and another baby on the way.

He said his decision to attend the College was prompted by the realisation that accredited qualifications could help with his career progression.

Having left school at sixteen, Chris admitted that as a teenager, he didn’t have much interest in qualifications but that changed as he got older.

While working in the maintenance department of MDF Ltd in Antrim (MDF is part of the Retlan Manufacturing group which includes SDC Trailers), he decided to do a BTEC in Engineering at the College’s Ballymena campus as a steppingstone to going to university.

“The company was very accommodating and allowed me to change my hours so I could attend the College one day a week.”

Going back to school after a break of over 15 years was not without its challenges but Chris said the positives outweighed the negatives.

“I was the oldest in the class and, although there were other mature students, most of the students were teenagers. When I was younger, I wasn’t very focused on qualifications but now that I’m in my mid ‘thirties and have valuable work experience under my belt, I could see the relevance and importance of what was being taught in class and that certainly helped.”

Having come through the BTEC with flying colours, Chris was able to progress to the Foundation Degree in Electronic and Engineering within the College in Ballymena.

He continued: “The Foundation Degree was my route to university. I was working full-time but the course was delivered one day a week so I felt it was achievable and, once again, the company allowed me to change my hours around so I could attend College.”

Chris said he was delighted to graduate with distinction and getting the Dayle Smyth Award was the icing on the cake.

“It is a huge honour to be selected. I faced some challenges throughout my time at the College but I was always determined to keep going. I hope my story will inspire others to persevere and that like me, they’ll find that it’s well worth the effort.”

The Dayle Smyth Endeavour Award is presented annually in memory of Dayle Smyth, an outstanding former student at Northern Regional College in Ballymena, who tragically lost his life in a road traffic collision in 2014, soon after achieving his Higher National Diploma in Manufacturing Engineering. Dayle’s father, Garry said the award, which this year was presented virtually because of COVID restrictions, helped keep Dayle’s memory alive.

Mark Maginty, co-ordinator of the part-time Foundation Degree in Electrical and Electronic Engineering at Ballymena, explained why Chris was selected for the Dayle Smyth Endeavour Award.

“Chris completed the Foundation Degree with an overall distinction which is an excellent achievement, but it was his journey that we felt merited the award.

“Chris became a father while he was due to sit his second-year exams. He was not able to study properly or complete final sections of his coursework. As a result, his exams and courseworks were deferred to allow him time to mentally prepare, he subsequently passed with flying colours. Christopher is a delight to have in class and is a real credit to the College.”