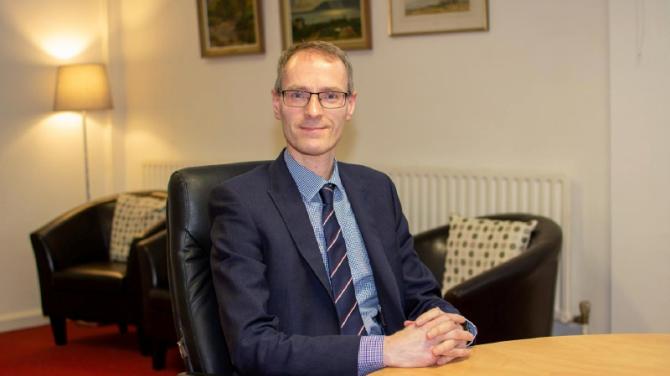 BEDDING into a new job can be stressful at the best of times so spare a thought for Phillip Elliott who took up the post of Principal at Cambridge House Grammar School just a few weeks ago.

But it seems that Mr. Elliott is taking his new role in his stride despite the impact of Covid and resulting restrictions .

A native of Manchester, Mr Elliott read Music at Oxford University where he was Clothworkers’ Scholar at St Catherine’s College and Organ Scholar at Hertford College.

After graduation he undertook teacher-training in Manchester before taking up his first teaching post in 1996 as Assistant Director of Music at Bradford Grammar School, West Yorkshire.

Outside the classroom, Mr Elliott is a keen musician and a Fellow of the Royal College of Organists, and he has performed in venues across Northern Ireland including the Ulster Hall, St Anne’s Cathedral in Belfast, and St Patrick’s Cathedral in Armagh. He is married to Claire, a solicitor from Portadown, and they have three children, Susanna, Deborah and Andrew.

Mr Elliott has been delighted by the warm welcome he has received from pupils, parents and staff upon taking up his new post at Cambridge House.

Although it is unusual to start as Principal at a time of online learning when the majority of pupils are working at home, he very much looks forward to the easing of the current restrictions and welcoming pupils back into school in the near future.

In spite of the uncertainty surrounding the arrangements for awarding grades as a result of the cancellation of GCSE, AS and A Level examinations, Mr Elliott has been hugely impressed by the levels of engagement shown by Cambridge House pupils in their online learning, and he pays tribute to the teaching staff for the quality of the lessons provided during this “Stay at Home” period.

Likewise, he is acutely aware that the cancellation of the AQE Common Entrance Assessment has created uncertainty for some P7 pupils.

However, Mr Elliott and the Cambridge House Board of Governors remain committed to ensuring that parents and pupils are given appropriate support, advice and guidance to allow them to make informed decisions about the transfer from P7 into Year 8.

The Cambridge House Grammar School Prospectus and Virtual Open Morning will be available to view on the school website www.cambridgehouse.org.uk at the end of January.