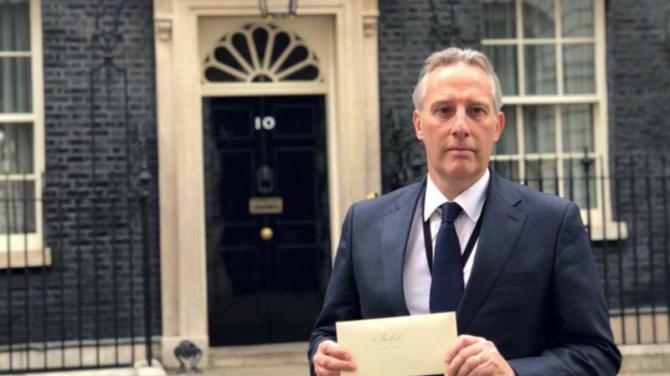 IAN Paisley says he does not regret backing Brexit - but he warns that the current management of the process has the potential to bring about an ‘economic catastrophe’ for Northern Ireland.

The Guardian asked the North Antrim MP to present his personal ‘Brexit update’ for local constituents. These are his words.

“I voted for Brexit in 2016 along with the overwhelming majority of my constituents, North Antrim was in the top ten vote leave constituencies in the U.K. and I don’t regret it for one minute.

“What I do regret is the blatant betrayal of the British people by two Prime Ministers who told us all they were unionists and then negotiated a backstop and then a protocol at the behest of the EU and political pressure from the Republic of Ireland - who wrongly threatened the peace process is in jeopardy.

“The brace of Prime Ministers should have been stronger for the Union - I fear they have a very English view of it.

“It’s not the first time this has happened to Northern Ireland. Margaret Thatcher did it in 1985 when when she agreed a form of joint authority with the Republic of Ireland and subsequently regretted it. Indeed, in this centenary year of our wee country we are reminded of Sir Edward Carson’s words that we are “treated like a rung in the ladder” for people to climb to high office only to kick us away.

“I and Brexit voters are not responsible for the betrayal of the Prime Minister. In fact I helped take one from office!

“I on your behalf voted against the protocol and the back stop. Let’s be clear, the protocol belongs to the Secretary of State, the SDLP, Sinn Fein, the Alliance Party, the Dublin government and those foolish trade bodies who acquiesced in it.

“If I was responsible for it I would shoulder that responsibility and argue for it, if I was convinced it was correct.

“In the protocol it has a clause number 16 that allows for either the U.K. or EU to unilaterally stop implementing any part of it that is causing unintended economic hardships or society difficulties.

“Within the first week of it operating we see the economic catastrophe ahead.

“I and my colleagues warned this would happen and so it has come to pass. Hauliers from here are inundated with a mountain of paper work, a blockade to trade, delays at ports, food stuff shortages. Small businesses unable to get parcels, consumers choice limited. The economic and society impact is obvious. So much so that the republic’s revenue commissioners have already stopped implementing the protocol because of the damage to Dublin Port. Yet here, as Rome burns, Government fiddles!

“If it can be changed, and it can, then I am calling on all those parties who supported the protocol to recognise it can be changed to set aside their politics of opportunism and agree that it should be removed smoothly so as Northern Ireland can trade like the rest of GB.

“It is up to the EU to protect its single market in the south, its not up to you and me members of the U.K. to do that for them. Yet this protocol is about protecting the South and nothing to do with supporting Northern Ireland. So for those who ask for the alternative - there it is !

“You see folks there was a deliberate attempt by some to punish the U.K. for Brexit and the most obvious place to punish was NI. Well we must not be a whipping animal for any political objective. We demand the Government takes action on this protocol and invokes article 16.

“Normally unionists are accused of shooting “1690”. Today I am imploring the government to “Invoke 16”.

The Guardian welcomes political comment on this and other issues. Contributions should be sent to editor@ballymenaguardian.co.uk