Joanne puts her crafting talents to good use 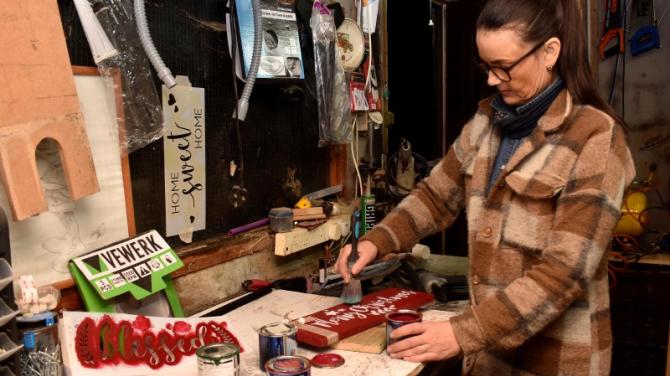 A Ballymena woman who was diagnosed with a rare form of cancer just prior to lockdown has decided to give something back to charity by designing and crafting a variety of bespoke wooden items and gifts.

Joanne Lennox has been selling the products, including bird feeders, Christmas trees, plaques, and lanterns in aid of Action Cancer NI.

The items have been in high demand in the run up to Christmas and so far Joanne has raised over £700 for the charity.

Joanne discovered in February of this year that she had a rare carcinoid tumour on her left lung and attached to her windpipe.

The 46-year-old is waiting for an operation to remove her left lung but disappointingly she learned that it will be delayed for four months due to Covid 19.

Joanne, who lives in Cullybackey with her husband and twin daughters, explained: “I took a chest infection last September and was told I had to go for an emergency CT scan because it was very rumbly. They phoned me back an hour later and said they had seen something.”

Joanne, who is a keen sportswoman and coaches netball, continued: “I didn't feel that sick at the time so I continued to play sports and netball. I played a match the following week but I still had the cough and when I came home from the match I began to cough up blood.

“Although I contacted Dalriada on call I still didn't feel that sick so I went to bed but when I got up the next day it was worse so I went to A&E.

“I was admitted to hospital because my lung collapsed and I couldn't breath. I was told I had a carcinoid tumour which is very rare on my left lung and attached to my windpipe.”

Throughout lockdown Joanne regularly attended the Royal Victoria Hospital in Belfast for treatment.

She said: “I started my chemo and laser surgery and I seemed to spend the whole of lockdown between the Royal and my bed.

“In November the consultant told me they had lasered enough of the windpipe to do me over Christmas as they had to free up the hospital due to Covid.

“I need an operation to remove a quarter of my windpipe and my left lung with everything being bypassed and directed into my right lung. Once I get the operation the tumour should hopefully be taken all away.”

Unfortunately Joanne received news that her operation has been delayed.

She said: “I was built up for the operation both physically and mentally. After I was told I went into a depression because they said it would be four months.

“I have two or three good days but then the rest are bad and at times I am so ill I have to stay in bed. One minute you are doing 110 miles an hour and then everything just stops.

“But I am very lucky to have the support of my daughters and husband as I know the situation is very hard on them too.”

Joanne decided to focus on trying to give something back Action Cancer NI and with the help of her father in law, Raymond Lennox, has been creating bespoke wooden planters, bird feeders, Christmas tress and Christmas plaques.

The items are being sold at Blossom and Birch, Broughshane Street in Ballymena, which has hosted a number of events in aid of charity, one of which included a gallery night featuring art work by David McAneaney who also works at the florists.

Joanne commented: “Between Raymond and myself we have been making a range of items and there has been a big demand for them. It has been good for us both as it has kept us busy and focused.

“It is something to keep your mind off things and it keeps us going.”

Despite the impending lockdown Joanne and Raymond hope to continue their fundraising efforts and anyone who is interested in purchasing an item can contact Joanne via her facebook page.