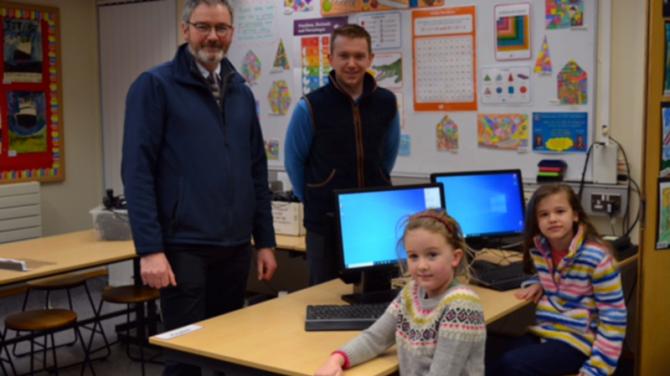 The computers were refurbished by GSC Computers who were delighted to help.

Mr Roy McClelland Principal of Kells and Connor Primary School said: “We are thrilled and delighted to receive these computers which will prove very useful within school.

“It is a delight to see the initiative and thoughtfulness of two business leaders in our community coming forward to support the school in such a practical way.”

Gary Conaughty of GSC Computers commented: “When William approached me about refurbishing the two units, I was more than happy to bring them up to current standards.

“It’s good to see units like this being reutilised for the benefits of our children.”

Cllr. McCaughey who donated the computers stated: “I was very pleased when Gary agreed to help me refurbish the desktops and have them used by our local primary school.

“Gary has left these computers as new and hopefully the school will have them for many years to come.”