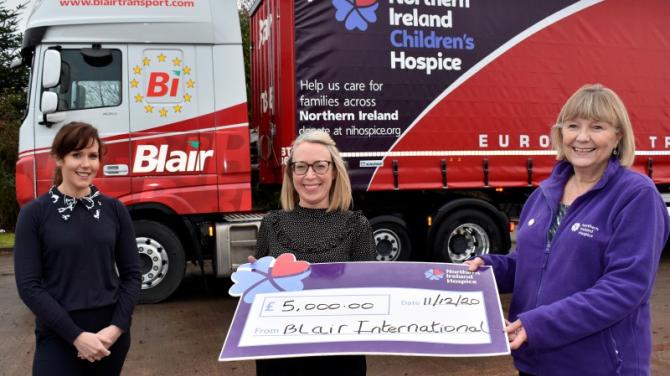 BLAIR International, from Cromkill Road, Ballymena have presented a £5,000 cheque to the Northern Ireland Children’s Hospice.

Alan Blair, Director at Blair International, said that instead of normally giving out Christmas presents to their customers, as a token of their appreciation, they decided to give what they would have spent towards Hospice.

“Normally at Christmas our company spends money on stationary items such as calendars, diaries, pens and Christmas gifts for our customers,” outlined Alan.

“We also annually donate some money to a nominated local charity for the good work they provide throughout the year. This year we took the decision that instead of giving out gifts, that we would instead donate all this money and more to the Northern Ireland Children’s Hospice.”

Alan explained that his grandson Tommy suffers from a condition known as Tubular Sclerosis which brings with it a range of complex special needs.

“He currently benefits from support provided by the NI Children’s Hospice. This local charity provides Tommy with much needed specialist care and support to not just my grandson but to other children and their families across Northern Ireland,” explained Alan.

“Each year is a struggle for charities like the NI Children’s Hospice to raise enough funds to function. However, due to the global pandemic caused by Covid-19 this has been an even tougher year for them.”

Alan said his family sees first-hand the support and specialist care that this charity provides by “how they support and care for my grandson.”

“We were so grateful of all that the NI Children’s Hospice does that we as a company decided to advertise the charity on some of our vehicles,” he said.

“ It is hoped that as our vehicles drive all over the UK and Ireland that this would further raise the charity’s profile by advertising the NI Children’s Hospice service and help with future donations.”

Alan concluded - “I personally believe the work they do is invaluable to families and hope that by advertising their service it will lead to many more donations.”