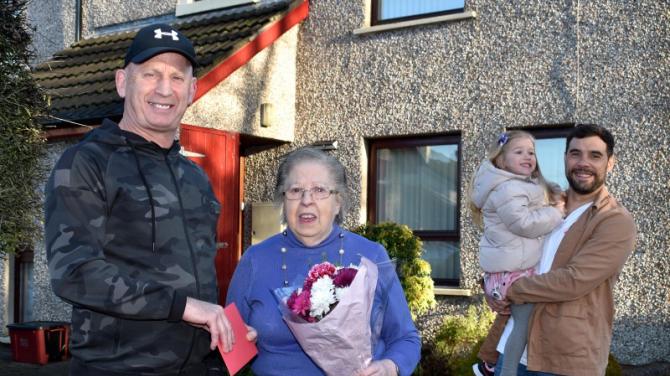 LOCAL people have rallied round to show their support for a woman who was targeted by a five-strong gang of thieves last week.

There was widespread disgust when circumstances of the crime became known and that was translated into a very generous donation from locals keen to show 79-year old Mrs Ann Purdy the better side of human nature.

On Saturday she was 'utterly surprised and humbled' to receive a financial gift which was collected in the space of one week via a 'gofundme' page set up by Denise Milliken whose husband, Stephen had gone to the aid of Mrs. Purdy in the immediate aftermath of the incident in the car park of Tesco supermarket off the Larne Road.

Stephen himself attended the handover and he was thanked for his help and assistance by Mrs. Purdy's son, Bert, well known for his refereeing role in the Ballymena and District Saturday Morning League.

Mrs. Purdy, who was left shaken by the callous actions of the gang, said she was 'deeply grateful' to Mr. Milliken.

"It was a good job he was there. He managed to get me sorted out and escorted me back into the supermarket.

“He was a real gentleman," said Mrs. Purdy.

Bert Purdy said the gift was a wonderful Christmas present for his mother.

"On behalf of my mother and myself, I'd like to thank everyone who donated. We cannot thank you enough for your kindness. It helps restore your faith in humanity," said Bert.

Meanwhile, police are still seeking witnesses to the crime which seems to have been carried out by a well organised gang.

They said: “At around 8:15pm on Saturday, December 5 , it was reported that four men and one woman were involved in the theft of a purse belonging to an older person in the car park of a commercial premises.

The suspects are believed to have taken a purse containing a sum of money and made off in a grey Volkswagen Jetta and a silver 3 series in the direction of Ballykeel estate.

Enquires are ongoing and anyone who has information in relation to the incident, is asked to contact police on 101, quoting reference number 1524 of 05/12/20.