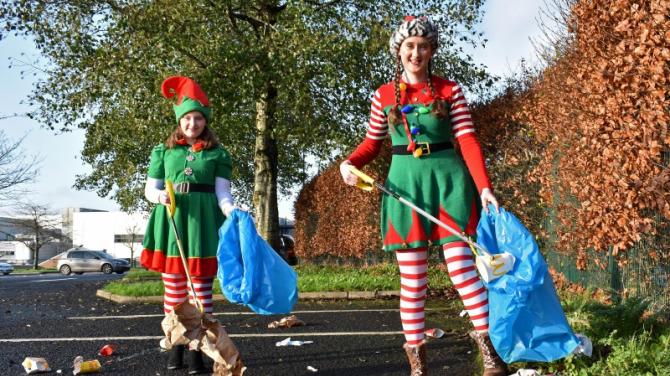 HANNAH Crawford and Chloe Jamison, ‘The Ladies Who Litter Pick’, dressed up as Elves last week as they helped tidy-up Ballymena!

The duo, from Ahoghill and Cullybackey respectively, embarked on the litter pick idea during early lock down - and have been busy ever since.

And they turned their venture into a fund raiser and so far have collected in over £600 for Women’s Aid.

While they litter pick they also collect in sponsorship for the very worthy cause.

A couple of weeks ago The Guardian reported that 23-year-old Hannah and 21-year-old Chloe had set themselves a target - 40 hours of sponsored litter picking.

“We started our litter picking adventures in July and so far have completed 39 hours, walking 19 miles and collecting 50 bags of litter,” outlined Hannah, a Children and Young Person’s Support Worker for Women’s Aid.

“We came up with ‘Ladies Who Litter Pick’ during lock down when we were going on more walks,” recalled Hannah.

“During these walks, the litter we noticed was shocking! We wanted to help the community, the environment and this much needed and important charity.”

Hannah is full of praise for the “outstanding work” that Women’s Aid does for women and children who are living or have lived with domestic abuse, especially during this lock down period where domestic abuse has increased.

“There have been 8,000 domestic abuse incidents reported to the PSNI during lock down and these are ones that are just reported,” said Hannah.

Last Wednesday Hannah and Chloe dressed up as Elves and worked their magic tidying up the car park area adjacent to Seven Towers Leisure Centre.

If anyone would like to support ‘Ladies Who Litter Pick’ they can contact the JustGiving page https://www.justgiving.

“People have been very kind to us, which we greatly appreciate,” said Hannah and Chloe.

“We say a big thank-you to every single person who has donated.”

Special thanks goes to Jeff Hamill, of Mid and East Antrim Council, who supplies them with bags, litter picks and hi viz jackets.

And thanks also to Council also collect the rubbish!