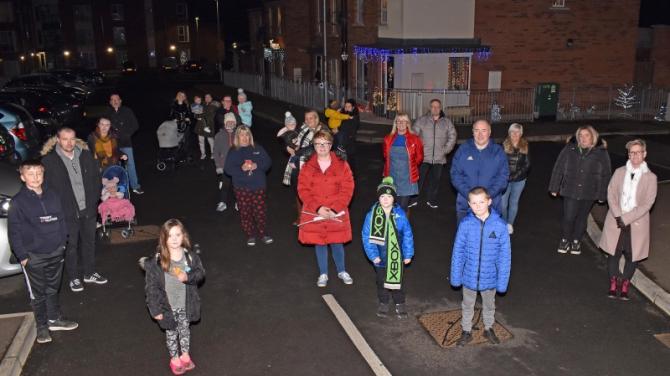 COVID-19 has failed to dim Christmas Tree plans at Ballclug Mews in Ballymena.

Because of restrictions the Residents Group were unable to facilitate putting up a real tree.

But thanks to an idea from local Councillor Rodney Quigley they now have wooden trees with lights attached on display.

The Residents Group thank Cllr. Quigley and each resident who kindly donated money to cover the cost of the trees.

“It is greatly appreciated in these tough times,” said the Group.

The Residents Group said Choice Housing were sad at not being able to put up a real tree.

But they said Cllr. Quigley’s idea was “a viable and reusable alternative.”

Cllr. Quigley said after all the negativity associated with Ballyclug Mews in the past, “it is great to see the residents coming together to create something positive in the area.”

“The recently formed Residents Group have shown great leadership and tackled any issues head on,” said the Councillor.

“I am delighted to have worked with them since their formation. The Christmas trees will brighten up the area and create a real festive atmosphere in these testing times.”

Cllr. Quigley said the Group and himself express their gratitude to Moorehead’s Spar for contributing to the Switch On by providing refreshments for everyone. On Friday night the tree lights were switched on by Billy George Donnelly and Phoebe Tweed with her mum Kirstine.