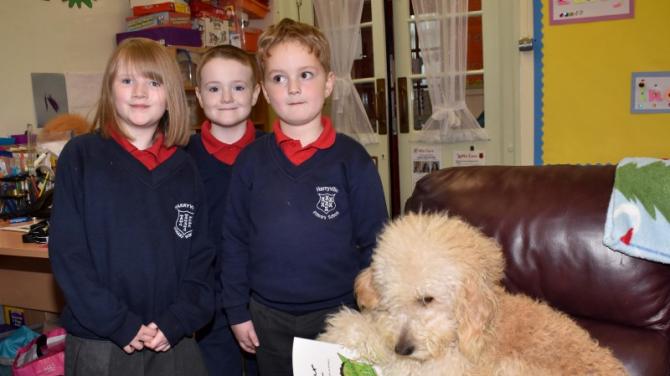 MEET Koda - the 'Irish Doodle' therapy dog - who is taking the lead in providing soothing and comforting care to pupils at Harryville Primary School.

It is believed that Koda, who is a Red Setter/Poodle mix, may be the only resident school therapy dog in the Ballymena area and already, the canine companion is 'top of the class' at the primary school.

Harryville Primary School already has a dedicated Nurture Unit in place and Koda is a much loved addition to the nurture team.

At just under a year old, Koda is still just a puppy, but she has made a big impression at the school and her calm nature has helped to relax even the most anxious of pupils.

One pupil, Amelia, said: "Koda makes me happy when I am stressed and I love to just cuddle her".

Mrs Sands, Nurture Teacher at the school, told the Guardian: "There is a lot of research which highlights that being near a dog, or owning a dog, just simply makes you feel better.

"Petting a dog can help you relax and your body produces endorphins, which are essentially happiness hormones.

"Dogs can have such a calming effect and it is a great idea to have them in a school setting.

"Koda was brought into school in around March time as just a little pup. She experienced around two weeks of school life and then Covid-19 hit.

"We are awaiting specialised training for Koda, which was halted due to the pandemic, which will teach both myself and Koda the basic skills and hopefully new ideas which we can incorporate into a learning and nurturing environment."

Koda lives with Mrs Sands, her husband, two children and her three other dogs - a Chocolate Lab, a Beagle and a Jack Russell.

Mrs Sands said: "She is just a member of the family."

Mrs Sands continued: "She has grown so much since March that some of the children even asked was it the same dog!

"The difference she has made already has been unbelievable.

"We have quite a high percentage of pupls with social and emotional difficulties here in the school, and pupils who may have been shy or nervous before have really grown in confidence with the help of Koda.

"We already run a nurture unit here in school which promotes that idea of a warm, welcoming and nurturing environment, and where we try to break down that barrier between home and school.

"We want to project a homely element to our school and what is more homely than having a dog.

"The pupils have had an amazing reaction to Koda and she benefits the staff too.

"We have had some children who wouldn't even had made eye contact with teacher and would have cried a little and these same children are now walking in smiling. The turnaround is incredible.

"Some children lack confidence and self esteem, they can be upset and crying, and we encourage them to sit and read to Koda.

"Koda listens to them, she doesn't judge them and the children don't have the pressure of an adult watching them read.

"Sometimes, Koda will fall asleep and we tell the children it's because they have read the story to her so well and helped her relax.

"Even with parents, some may have not really had much of a conversation with staff before, but having Koda here has just brought out a different side to them, as they want to chat about her and pet her.

"This year was a different year for our P1 pupils. In normal circumstances, beginning school is already a nerve-wracking time for pupils but this year, it was especially so.

"Parents had to leave pupils at the door where they came in to a room full of strangers wearing masks and visors.

"Naturally, it was upsetting for a few of the pupils and that's where Koda came in.

"Pupils are able to build a relationship with the dog and to just know that she is there is a comfort.

"If they feel anxious, they can go on a wee trip up to my classroom to see Koda or we can carry out a classroom visit.

“Having a therapy in dog in school has been a really positive experience and I would recommend it to any other school.

"It definitely works in practice and makes a huge difference to children with social and emotional difficulties".