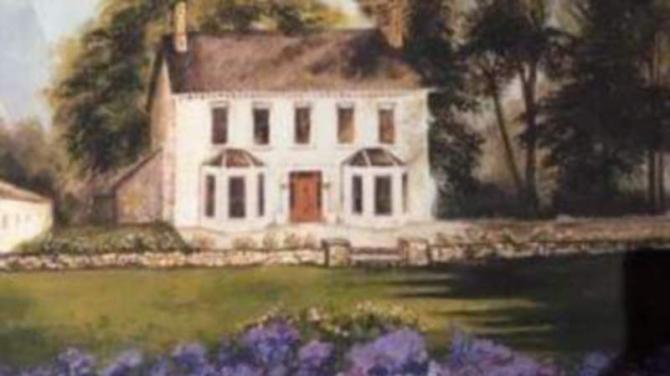 WHEN photographer Darren Crawford snapped some images of the recent demolition of the Knockeden Lodge public house at the top of Ballykeel II estate, they sparked a childhood memory for Guardian Editor, Dessie Blackadder.

Darren’s ‘pics for posterity’ recorded the end of one era on the site but younger generations will be unaware of the previous history of that area.

Dessie explains: “When Darren showed me the pictures I told him that the pub had been built on the site of a big country house and lots of associated farm outbuildings.

“Being a wee bit younger than me, Darren had no such memories!”

But when you get something in your head, you’ve got to follow through and that’s what prompted Dessie to ask on social media for any memories of the previous building.

And it did resulted in others recalling the striking building which dominated that part of the Crebilly Road before it slopes sharply upwards towards the heights which give such a wonderful view over Ballymena.

Dessie takes up the story: “I think I was in P6 or P& at Ballykeel Primary School when the old house was vacated.

“When you are 10 or 11, old places like that have a strange fascination so myself and some others decided we’d go up and have a prowl around now that everyone had gone.

“Obviously we were trespassing but to be honest that never entered our heads. We weren’t out to do any damage, we just wanted a look around this complex of buildings - and especially the big house.

“Being steeped in the traditions of Crebilly’s headless horseman and other ghost stories it was too good an opportunity to miss.

“I remember that the gates to the wee drive leading past the farm buildings towards the house was open so we all marched in. It was after school and in broad daylight but I can remember we were all daring each other to be the first to go into the house - on the basis that every old building we came across was, more than likely, ‘haunted’!

“Someone has been there before us and a back door was open so we peeked inside. I can’t remember much about the interior, but there was a big kitchen and lots of rooms.

“Anyway, the decision was taken to explore further so we climbed the stairs and, if my memory is correct, there was a stain glass window on the landing.

“By that stage, the jitters were getting to all of us and when a strange noise was heard, we nearly ran over the top of each other to get out.

“I’ve recalled that childhood memory every time, I drive up the Crebilly Road.”

To his surprise, Dessie was contacted by Jane Allen (of Jane’s Kitchen) who revealed that her mother had actually lived in the building - which was originally known as Knockeen House.

She said: “My mother who is Helen(nee McCaughey)King lives with my father James King at the Clougher, outside Ballymena. My father is a retired famer and my mother still keeps active assisting my brother James around the farm

“Mum’s grandfather Robert McCaughey ,inherited the farm at Ballykeel from his brother who died prematurely during the time that Knockeen House was being built circa 1860.

“Helen’s father the late Samuel McCaughey was born in the house in 1897 . He married Mary Graham from Ballymarlagh . They had 13 children and farmed at Ballykeel until 1960.

“Afterwards the farm was sold to the late John Kissack and it was from him that the farm was vested by the Government in order to build the M2 Motorway and to the Ballykeel 1 and 2 estates.His son James Kissack is still alive and lives at Ballymarlagh.

“Granny and Granda McCaughey moved to Leighinmohr Avenue after they sold the farm.”

Helen still has fond memories of the large three storey house, with high marble fireplaces and especially the breakfast room where as children they all gathered before leaving for school .

“The rambling outdoors with the beautiful large trees was my playground,.

“I remember that our neighbours were Bertie Wilson and family, Jim Wiggins (who worked at Fairhill for a life time ) and Lizzie McNeilly who kept goats.

The surrounding Laurel trees were recalled by Ballymena exile Sandra Clarke and various others whilst Kenny Allen, who was living in Ballykeel at the time recalled: “It was a beautiful house with a large staircase and a kitchen with a big range. We used to play in it as kids.”

Ali Wright chipped in to share his memories, recalling: “I remember it when the farm belonged to Hugh Kissack. I remember he had a son called Haydn who I played with when I visited my grandad.

“My grandad worked for Kissack’s as a farm labourer and lived in a small cottage beside it.”

Further information was provided by our friends at Old Photos of Ballymena who said: “Knockeen House appeared on the 1st Series Ordnance Survey map of 1833. The farm extended across what is now the M2, to a laneway which ran to another farm, located approximately where the Larne Road roundabout now sits.

“Somewhere along the line, the name seems to have change from Knockeen to Knockeden, possibly around the time the farmhouse was turned into a Bar & Restaurant, which was in the veryb early 70s.”

The original and long-time landlords of Knockeden Lodge Public House were Jack and Iris Hill but the premises passed through many hands in the half century since they pulled their first pints.

Our thanks to Helen King and all the lothers who helped compile this feature.