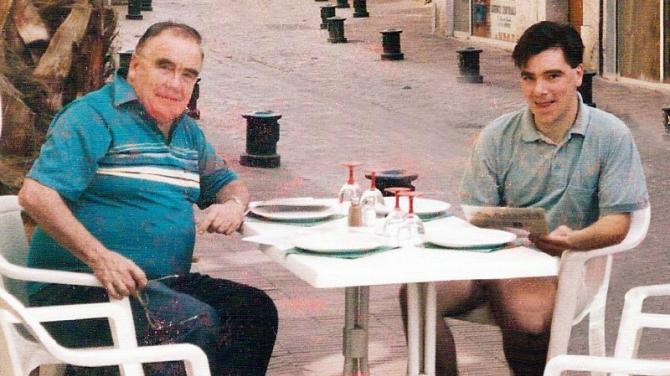 ‘Malcolm Brodie & Me’, which has garnered a plethora of five-star reviews since it came out a month ago, tells the story of 57-year-old John’s relationship with the legendary Belfast Telegraph sports editor, who died in 2013 aged 86.

John, a former Ballymena Times reporter who was brought up in Hill Street, replaced Brodie as the province’s leading football correspondent nearly 30 years ago.

The ‘retired’ Scotsman, however, accompanied his former prodigy to four World Cups and, during that time spent together, Brodie revealed many hitherto unknown facts about his remarkable life and career.

“When Malcolm died, there were many obituaries written about him by journalists from all over the world,” said John.

“It was clear he was held in the highest regard, but it was obvious from what they’d written that they didn’t really know the man behind the big headlines, the big exclusives.

“I’ve always wanted to write a book about someone who was top of his profession for over half a century, a man whom even behemoths of sports writing such as Hugh McIlvanny and Ian Wooldridge were in awe of.

“The ‘Brodie stories’ are the stuff of legend, but no one had ever put them down on paper before, not even the great man himself.”

John’s main problem was finding the opportunity. As Executive Editor of the Belfast Telegraph, there wasn’t much free time to spend on a 100,000-word book.

That all changed when the multi-award-winning journalist collapsed in his office after suffering a life-threatening stroke just over two years ago.

“Prior to that night, I’d missed just five days in 35 years through illness,” he said.

“Maybe it was my body telling me to slow down. Whatever it was, I was ready to listen.”

John remembers being in the office one minute, lying in intensive care at the Royal Victoria Hospital the next.

“It’s my close colleagues and family I felt for,” he said.

“They were the ones who had to live through that trauma, while I was unconscious and oblivious. I still feel guilty about what I put everyone through back then.”

A week in the RVH, being treated for the aftermath of a 'left temporal lobe hypertensive haemorrhage', was followed by speech therapy, physiotherapy – and nine months away from work.

“Thankfully, I suffered no lasting physical damage but what happened took its toll psychologically,” he said.

“One minute I was thinking ‘why me’, the next I was thanking God for how fortunate I’d been. I realised that after seeing other stroke survivors at therapy sessions. Some were really struggling”.

With his wife Claire, who is also a journalist with the Belfast Telegraph, at work and young daughter Soley at primary school, east Belfast-based John was left with 10 solitary hours to kill each week day.

He therefore had ample time to write.

“That always came naturally to me,” he said.

“And the book was a labour of love; I hadn’t pitched it to publishers back then, so there was no pressure to finish it at a certain time.

“To be honest, if no one had wanted to publish it, I would have just put it out online for people to read.

“At one time, Malcolm Brodie was one of the most famous people in Ireland, never mind in journalism. He had more friends and acquaintances than anyone I ever met. I was sure a lot of people would be keen to read about his incredible life.”

John’s unique relationship with his mentor began in May 1977 when the then 14-year-old won four gold medals at St Louis Grammar School sports day.

“My father Joe joked ‘wow, maybe Malcolm Brodie will interview you about this’,” he recalled.

“I’d no idea who ‘Malcolm Brodie’ was, but made a point of finding out.

“That very day Malcolm was on the Tele back page, talking about Liverpool’s chances in the European Cup final... in Rome. I immediately thought ‘that’s the job for me’.”

A decade later, John was sitting in front of the legend himself, being interviewed for an opening on the Telegraph sports desk.

“It was just like joining Man United,” he said.

“These guys – Jimmy Walker, Jack Magowan and of course Malcolm himself – were the crème de la crème of Northern Ireland journalism.

“In those days, sports writers were almost as famous as the stars they reported on.”

John opted against a straightforward biography of Glasgow native Malcolm’s 50 years as the ‘doyen’ of local writers.

“A lot of the incredible things Malcolm achieved happened before I was born,” he said.

“But we spent many years travelling the world together, and the book is about the memorable stories he shared with me, and the unique, sometimes turbulent but never dull relationship that developed between us.

“We talked about old adventures, while at the same time making new ones...”

John, the middle of three sons (Gerry the oldest, Paul the youngest) was raised by Joe and Mary Laverty in a house which, at one time, backed onto a young Ian Paisley’s.

“I remember Mum hugging Paisley one day and Archbishop Cathal Daly, with whom she grew up in Loughguile, the next. No one could accuse her of not being balanced!” said John.

After completing the National Council journalism course in Belfast, the former All Saints Primary pupil joined the Ballymena Times as a cub reporter in 1983, then the Belfast Telegraph as north west correspondent three years later

A year after his dream of making it to the sports desk was realised in 1987, he became Malcolm’s assistant a year later.

“In total, Malcolm and I went to four World Cups together: USA, France, Japan and Germany. We also went to the Euro finals in Portugal," he said.

“Between us, we bumped into so many famous people – Barbra Streisand, John DeLorean, OJ Simpson (and Michael Jackson’s lawyer) Johnnie Cochrane, disgraced Bishop Eamonn Casey – mostly because they already knew him!

“This was a man who had interviewed Bob Hope, Irving Berlin, Glenn Millar, Frank Sinatra; he taught me not to be overawed by people just because they were so well known; ironically, at the same time I was awestruck by him.”

The new book, however, does not skimp on the many rows the two journalists had when John was vying to be the ‘new kid on the block’ and Malcolm was determined to stay on as the ‘doyen’ of Northern Ireland sports journalism.

“It’s definitely a warts-and-all book, but I felt that was necessary in bringing to the fore what a multi-faceted character Malcolm was,” said John.

“He didn’t rise to prominence without being ruthless at times, and it was obvious from the start that our relationship would be a topsy-turvy one.”

You can find the book for sale via Amazon.