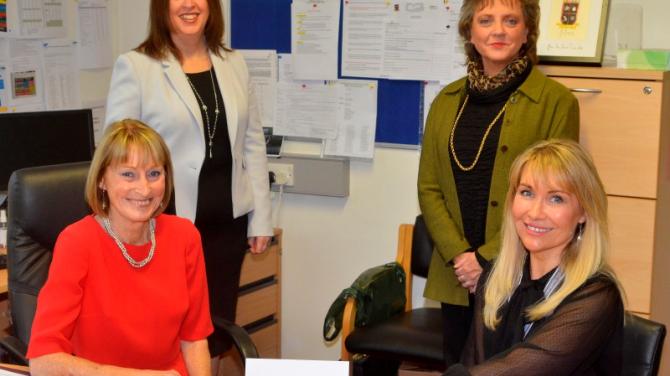 THE longest serving principal of Cambridge House Grammar School in Ballymena, Mrs Elma Lutton, takes her final curtain call and exits stage left on October 31, after treading the boards of this particular production for 46 years.

Mrs Lutton has directed her career towards both academic and non-academic success and has a belief in what she does, stating ‘nothing of value can be achieved without work’.

She began teaching in Cambridge House in 1974, the same year as the Rubik’s cube was invented, The Sting was awarded the Oscar for the Best Picture, Kung Fu Fighting was playing on the radio, Abba won the Eurovision Song Contest with Waterloo, a first class stamp was 41/2p, a bag of crisps 7p, a litre of petrol approximately 11p and the average house price was £10,000.

How times have changed, but she has remained a steady, permanent fixture on the staff and has forgotten more about teaching than many actually know about their own style of pedagogy.

Mrs Lutton said she “regards creativity in all we do in education as being a key factor to accomplishment and realises the young people of today must have a comprehensive and caring start in education to enable them to enjoy and value learning”.

One of her past pupils, now a teacher in the school, commented: “I imagine when a teacher chooses to retire, they want their pupils to remember the stories shared, the discussions had. That is how I remember my English and Drama lessons with Mrs Lutton. During these lessons, my love of literature was allowed to grow and ultimately led me back.”

Mrs Lutton is well qualified, holding a BEd (QUB), MSc (UU), PQH (NI) and currently completing an EdD (QUB). Her thesis addresses how effectively teachers are trained to deal with the increasing range of emotional health and wellbeing problems presented by young people today. This is particularly poignant in the Covid-19 times in which we now live and work.

Mrs Lutton started teaching English, both Language and Literature, Latin and Drama in Cambridge House Grammar School for Girls in January 1974, becoming Head of Drama in the September of that same year.

Past pupils commented that she brought Literature to life with her dramatic flair and prowess. She was responsible for the success of many of the school productions such as Macbeth, The Crucible, Our Town and Shaw’s Saint Joan, to name but a few. Additionally, she was closely involved with the annual Inter-Form Drama Competitions, which sought to identify budding stars as well as assisting in the development of transferable skills and capabilities such as self-management, working with others and the honing of interpersonal competencies.

Mrs Lutton delighted in organising and accompanying pupils to the theatre, whether locally or further afield, to see their version of the great works of drama. She was fortunate to be, for many years, the Chair of Ulster Drama and in the latter years of this school, a Senior Teacher.

Approaching many of the individuals who are patrons of the various Houses was easy for her, but she particularly enjoyed contacting Marie Jones, a Belfast-based actress and playwright to support Jones House, which Mrs Lutton headed as part of the Senior Leadership Team.

One of the Heads of Jones House of that time recalls: “This successful House was involved in many fund-raising activities, such as the Jones House Ball, Bake Sales and Go-Karting which enabled pupils, of all year groups, to work together, along with staff, to raise money for Cancer Research. They were ultimately recognised as Regional Award winners and celebrated at a luncheon in London.”

Mrs Lutton encouraged and championed all of these undertakings as she recognised the worth they held in the lives of both pupils and staff’. This role assisted in contributing to her other passion; pastoral care. She views this as an area which underpins academic success and contributes to the wider aspects of both school and community life.

She has been through what Dickens describes in his opening line of A Tale of Two Cities as ‘the best of times….and ….the worst of times’.

Mrs Lutton was appointed as the Principal in 2012 and has led the school to be one of the top performing grammar schools in the province. She has been the pioneer of many programmes and events, and there have been many successes and positive changes brought to the school as she has moved forward with her vision.

The Board of Governors have acknowledged their gratitude for all her work over the years and value the legacy she is leaving within the school. As an individual, she knows how to handle difficult situations effectively, recruit the right person for the job and remain calm under pressure; she has been the go-to-person for a long time.

In the title role, she has made everyone feel welcome with her kind words; this is part of the value she places on people and the contribution they make to any organisation.

Mrs Lutton said: “I believe that having power is about sharing power. I recognise what colleagues do and show appreciation for their work. I encourage people to develop their own ideas and to know they can make mistakes.”

This is a testament to her style of leadership; the work of other people is acknowledged and respected. She has enjoyed an excellent working relationship with the two Vice Principals and credits the success of the school to the building of these effective relationships.

Mrs Lutton considers herself to be ‘caring, with a good sense of humour’. However, she also realises that, as an individual, she is ‘very determined and can act decisively to achieve what I believe is right’.

She has been described as inspirational and has impacted the lives of 1000s of pupils and staff, both past and present, and each one is a better person because of it.

Mrs Lutton has taught generations in Ballymena over the past 46 years, children, parents and grandparents, and has been a stalwart in the ever changing world of education in this area.

The school has not looked back since she took up her post as she enjoys keeping up-to-date and strives to be ahead of the times.

A member of staff, who is also a past pupil commented: “As a teacher, Mrs Lutton brought creativity and passion to the classroom, making lessons interesting and fun.  She related to the pupils and cared for them greatly; and now after dedicating 46 years to Cambridge House Grammar School, things haven't changed.

“Mrs Lutton continues to cherish 'her boys and girls', always putting them at the heart of her decision-making; whilst inspiring and motivating her staff.  It has been a challenge to keep pace with her level of energy, and a privilege to have worked alongside a true educationalist with such a progressive mind”.

Mrs Lutton’s mantra is ‘Always stay true to what you believe in. Have integrity, honesty and a willingness to work hard’.

She has given, what some would describe as, a life-time of service to the development of her position on this stage; her energy and enthusiasm have been instrumental in ensuring that the school has continued to deliver professional, high-quality education throughout the Covid-19 crisis.

On her retirement it is hoped that it will be as Dickens describes ‘a far, far better rest I go to than I have ever known’.

Mrs Lutton will be missed by all at Cambridge House Grammar School and they trust that her departure is long, happy and healthy, where reading and the theatre remain her greatest passions.