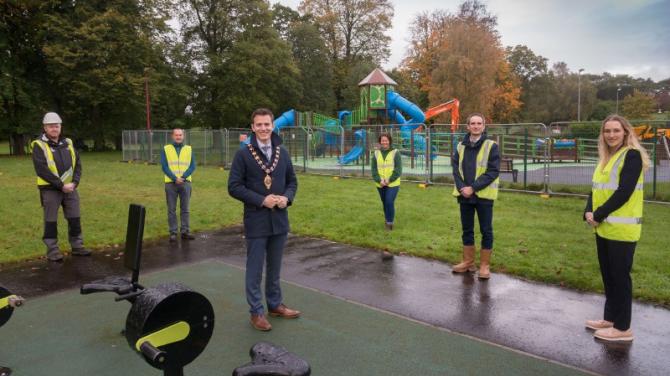 ‘OLD’ play areas at Ballymena’s People’s Park are expected to remain closed to the public until Easter next year to enable a new project to be constructed.

Phase two of the play area renewal scheme at the park will see the addition of a number of new, inclusive pieces of equipment for children of all abilities, including a wheelchair swing.

The delivery of phase two of the play area will see the two existing play areas combined and extended to provide a new, inclusive play experience for children visiting the park.

This piece of work is due to be completed by Easter 2021.

A further phase of work is planned at a later stage which will entail the creation of a teen space in what was the bowling green within the park.

Mayor of Mid and East Antrim, Councillor Peter Johnston, said: “I am delighted that work is commencing on this next phase of the play area in People’s Park.

“The hard work by Council and input from the local community will finally be realised with the official launch of the newly refurbished play area next year.

“This will be a hugely positive addition to the local area and it will have a significant impact on the quality of life of the residents in Ballymena and the surrounding area.

“This is the latest in a line of new and innovate park development projects across Mid and East Antrim that underline our commitment to enhancing play provision as a clear priority in the borough.”

The old section of the park will be closed to the public for the duration of the works.

Council received a strong response from the public on their views of play provisions of what should be included in the new play area.

Almost 1,000 people got involved in the public consultation which lasted four weeks.

The People’s Park celebrated its 150th anniversary this year and to mark the event Mid and East Antrim Borough Council are committed to investing in new facilities for the many children and young people who enjoy the park in their leisure time.

Good Health and Wellbeing is an integral part of the Council’s community plan and the installation of this new park highlights that those needs are being met.

Mid and East Antrim continues to deliver services that are inclusive to everyone within the borough.