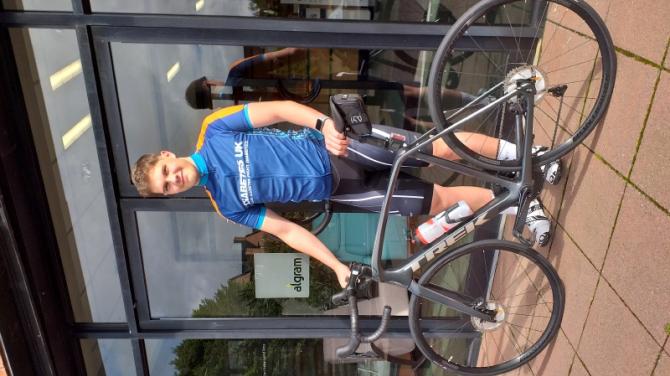 “I set myself the target of 250 miles to be completed during the month of September,” outlined Austin.

“I put the finishing touches on completing it last week and am delighted that I raised more than my original £1,500 target.”

Austin, himself a diabetic, thanks everyone single person who donated.

“The money is going to Diabetes UK, a very worthy cause. I am grateful to everyone for their greatly appreciated support,” he said.

It was not all plain pedalling for Quarrytown Road man Austin.

“I was sick for a couple of weeks,” he outlined. “I had a terrible cold. But I managed to get there in the end,” he said.

Being under the weather obviously put paid to some of the plans Austin had to clock up the miles.

Austin has been diabetic since the age of five.

In our preview back on September 8 we reported how Austin has always wanted to do something for the Diabetes UK cause.

A couple of years ago he had plans to tackle the London to Paris Cycle Ride.

“But around that time I picked up a hip injury which ended up requiring surgery,” he said.

That obviously put paid to his London to Paris ideas.

This year Austin contacted the organisers to see when, or if, there would be another such event.

With Coivid-19 wiping out virtually everything he was not sure what answer to expect.

But he was delighted to be steered on to the Diabetes UK’s Cycle for September. Austin signed up for the 250 miles - and had the full month of September to pedal this distance, and collect sponsorship for Diabetes UK along the way.

The Digital Sales and Marketing man at Algram in Railway Street, Ballymena, was more than busy at work and admitted finding it tough to get the time to cycle.

Eighteen years ago he was diagnosed with Type 1 diabetes.

“This obviously was a big change not just for me but for my family and those around me too,” outlined Austin.

“I’ve always been into sport whether it’s football, rugby, golf or cycling and I felt that cycling 250 miles throughout the month of September was a great way for me to raise money for Diabetes UK and give a little back.”