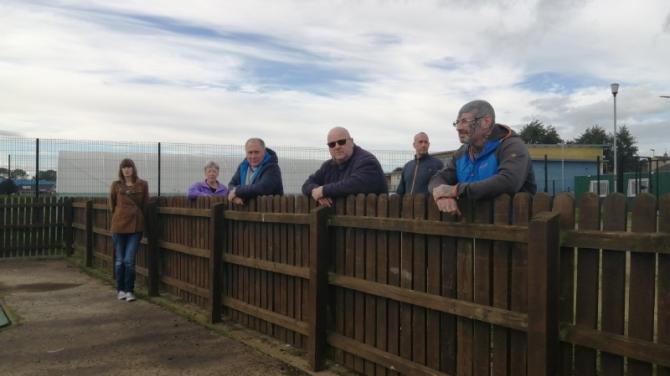 REPRESENTATIVES from community groups in the Harryville area united last week to call for an end to 'despicable anti-social behaviour' by a 12 strong teenage gang who are 'out of control'.

And they called in independent Mid and east Antrim Councillor, Rodney Quigley, to spearhead their efforts to bring an end to what they termed an 'appalling pattern of behaviour.'

Residents told the Guardian that incidents had ranged from mindless vandalism to threats of violence and worse.

Cllr. Quigley said he, along with 'responsible local people' had been trying to engage with the youths in order to let them see the level of annoyance in the community.

"It's fair to say that everyone in this area is well aware of who is causing the trouble. It is not a case of a herd of blow-ins wrecking and tearing round the place.

"These are the teenage sons of parents who grew up in this area but they are quite happy to cause havoc for older local citizens, bully youngsters and damage facilities which have been hard fought for in the area over the years."

The wanton damage to polytunnels at the allotments adjacent to Wakehurst Playing Fields was quoted as just one instance of the pointless but infuriating damage being caused.

"It's so stupid," said one resident. "They go around ripping holes in the polytunnels .. for what? It's not proving they are a big man, it just shows they are doing it mindlessly. They don't give a hoot about other people."

Harrassment of senior citizens is another issue which has brought local tensions to boiling point.

"Older people have had stones thrown at their properties and in some cases this gang has used foul and abusive language towards the elderly," said another resident.

"I know that some of the parents of these wee hoods have already been spoken to in order to make them aware of their activities.

"Some parents are mortified to hear what is going on but others don't seem to care.

“We need to make it plain, when other youngsters are scared to go to parks or walk the area at night for fear of these boys then it has gone well beyond the normal levels ofbad teenage behaviour.

"If we do not get some help to break this pattern of behaviour it can only get worse for this community. We need help from outside agencies to halt this stuff."

Cllr. Quigley said that the strength of community feeling on the issue was evidence of just how distressed local people had become.

“As the people here today have said, it’s not a case of teens being teens - there is a dangerous level of anti-social behaviour here which can only get worse if it goes unchecked.”

He added that was working with external agencies via Council in order to provide some form of detached youth services in the area as soon as possible.

“We need professionals to engage and provide support for the young people who we believe are involved in this behaviour.”

Cllr. Quigley noted that the loss of the MUGA sports area at Wakehurst had taken a potential weapon out of the armoury of local people.

“The MUGA has been used in the past to provide activities which do seem to keep quite a few on the straight and narrow.