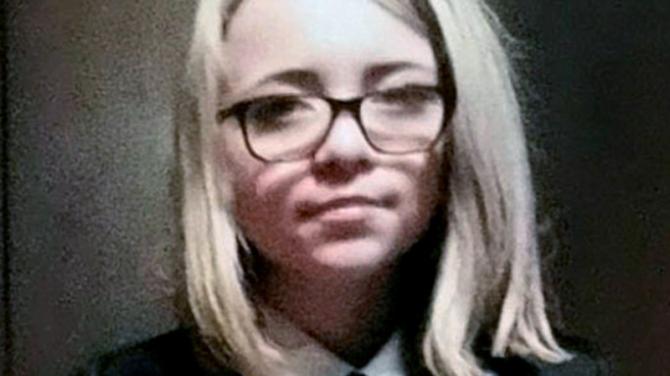 THE Ballykeel community will join together tonight (Thursday) for vigil in memory of the young girl who lost her life in a tragic house fire in the area last evening.

Brooke Reid McMaster (picture supplied by family permission) will be remembered at the show of community solidarity at 6pm at the junction of Orkney and Staffa drive.

Northern Ireland Fire and Rescue were called to the house fire in Staffa Drive at 5.46pm on Wednesday evening.

Brooke’s mother Martha and her grandfather, Mr. Billy McMaster both spoke of their devastation at the tragedy.

Billy McMaster told the Guardian: “The family wish to thank everybody in the Ballymena area for their support.

“I have been getting messages from across the country, from both sides of the community and I really do appreciate it. I know definitely the whole family circle would thank everyone for their support at this time.”

Reverend Martin McNeely of Ballykeel Presbyterian Church told the Guardian that the whole community was ‘simply stunned’ by the tragedy.

Later he posted on Facebook: ‘Short vigil in memory of Brooke will be at the Orkney / Staffa junction Thursday 6pm. Minute silence and prayer. The family thank everyone for all the comfort and outpouring of love. God is our refuge and strength, a very present help in trouble. – Psalm 46:1 (Social distancing under the circumstances).’

Chief Inspector William Calderwood said: “Police received a report of the fire at around 5:50pm. Tragically, the girl died at the scene.

“A man who was in the house was taken to hospital for treatment.

“The cause of the fire has not yet been determined and will be subject to investigation, in liaison with the Northern Ireland Fire and Rescue Service.

“There are no further details at this time.”

A spokesperson for NIFRS said: "Firefighters wearing breathing apparatus entered the house, extinguished the fire and recovered the body of a 12 year old girl.

"The cause of the fire is under investigation.

"NIFRS tenders its sympathies to the family of this young girl on their tragic loss."

A spokesperson for the Northern Ireland Ambulance Service told ‘Belfast Live’: “We got a call at 5.50pm today from Northern Ireland Fire and Rescue Service (NIFRS) asking us to attend a fire scene in Ballykeel, Ballymena. A person was reported in the building.

“We dispatched two emergency crews to the scene and one ambulance officer.”

A spokesperson added: “Two were from Ballymena and one from Antrim.”