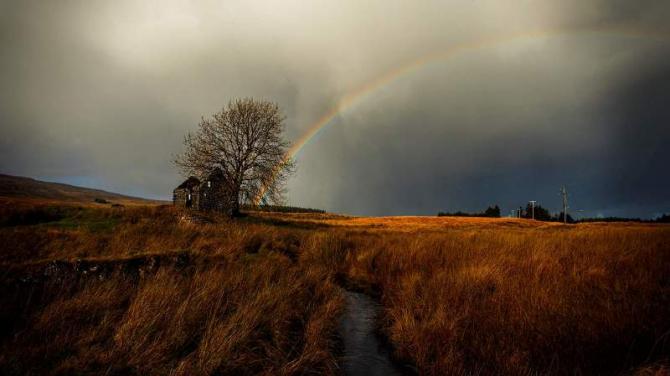 FOR just about as long as he can remember, James Hughes has been fascinated with photography.

Now the Ballymena man has published some of his favourite images in a new volume entitled 'North of Eden'.

It chronicles his second lifetime fascination - the nature of decline in the built environment hence the subtitle '3 decades of abandoned Northern Ireland consisting of interiors details and landscapes' .

In his time he's paid his dues from the role of local news photographer in the early 80s dealing with everything from monster political rallies to the traditional bread and butter fare of the weekly market.

But since those early days, James has embraced social documentary through commercial to fine art photography.

His first photographic experience was of a childhood spent using a box brownie (made by his mother when she worked for Kodak).

James is self-taught, and influenced by late 20th century photography and literature, influences that he continues to link through his practice to-date.

A celebrated photographer, with many exhibitions and awards, his work is represented internationally in museums and galleries. Commercial work also has its place while he continues to pursue his personal career and passion through photography, art and poetry.

James has an extensive background of research in photography (MA, MPhil).

He has always been drawn to travel and, of course, his camera was always to hand.

Turkey - and its capital, Istanbul, hold a fascination for the Ballymena man.

“I started off my six years in Istanbul with the book: Spectres of Trotsky: Interiors of Exile, which was part of Istanbul year of culture, and ended it with Gallipoli 1915-2015: A Local Legacy which took in the local connection through an exhibition at the Braid in Ballymena.

“In between I lectured on photography at Istanbul universities. On my website gallery you will see the sites of memory which range from locally St Patrick’s Barracks just before it was bulldozed to places such as the Berlin Wall to Phnom Penh’s darker sites with various countries in between.

On his latest book’s subject matter, James says he has always been fascinated with old buildings and their legacy in the landscape.

"I suppose my work demonstrates how I am touched by those places where damage and grace are inextricably entangled. It unconsciously links fragments, unearths connections and creates anew through the visual like a sacred task.

"The experience of time and space is paramount to living a life with meaning. My aim is to explore and present the historically forgotten, to place the previously unseen through a discarded past.”