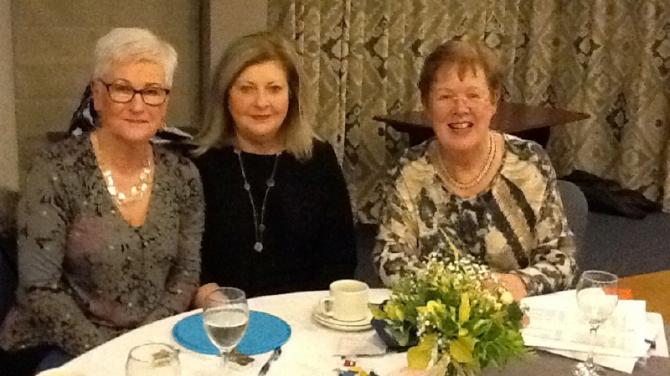 BROUGHSHANE Women's Institute should have been celebrating 80 years of fellowship and fun this week - but Covid 19 has scuppered their plans, for the time being at least.

In this special message, President Janet Gaston reflects on the past history of the WI and looks forward to the days when normal meetings can begin again.

Janet writes: - Firstly, let me just say that Broughshane Women’s Institute wishes everyone to be safe in these uncertain times.

I would also like to pay tribute to the courageous members in the community for the caring and selfless voluntary work they have been doing during the past six months and more.

It was on September 9, 1940 - just six days after the outbreak of World War 2 - that the inaugural meeting took place of approximately 40 local women, where it was unanimously agreed to form a WI branch called Broughshane Women’s Institute.

A ballot to create a committee was carried out and thus the start of our WI monthly meetings.

These first meeting were held free of charge in the Raceview Dining Hall thanks to the Directors of the Mill.

These initial members kept themselves remarkably busy throughout the World War Years raising money for the War Charities.

Bring and Buy Sales, Jumble Sales and Beetle Drives were organised so that parcels could be sent through the Red Cross to two local soldiers who were prisoners of war.

Members also knitted pullovers, socks, gloves, and balaclavas for the Forces with wool supplied by the Red Cross.

In 1946 WI Areas were formed by The Federation of Women’s Institute Northern Ireland, their headquarters are still in Belfast and 21 Areas of Women’s Institutes exist today with a total membership of approximately 4000 members. Broughshane WI is in one of these areas named Slemish.

Today our busy institute covers a magnitude of hobbies and useful lifestyle necessities.

These include Baking, Bowls, Cookery, Craftwork (in several mediums), Flower arranging, Golf. Painting, and quizzes and an Annual Scrapbook competition to name but a few.

The Scrapbook competition uses various craft techniques, materials, photography, and layouts to compile a vivid colourful scrapbook depicting the story of the Institute’s activities from the previous year.

I am delighted to say Broughshane has taken first prize for several years thanks to Iris and Martha who artistically create these factual accounts.

Members continually impress us with their baking and flowering arranging skills resulting in cups galore each year.

Due to Covid-19 our 2020 programme like many other organisations was cancelled including our ambitious plans for our 80th Celebration.

We remain hopeful to celebrate our 80th in style as soon as we are permitted to do so.

Again, our tentative plan was to restart our monthly meetings this October (held on the second Monday of the month in Broughshane Community Centre) whilst strictly adhering to Government Legislation and social distancing.

This however looks like it may take a little longer to return to normality.

Facebook page ‘We are Broughshane’ will have updates for members and should you wish to become a member of our Institute please come along to one of our future meetings where you will be made most welcome.