Reader fumes over bunged out bins in People's Park 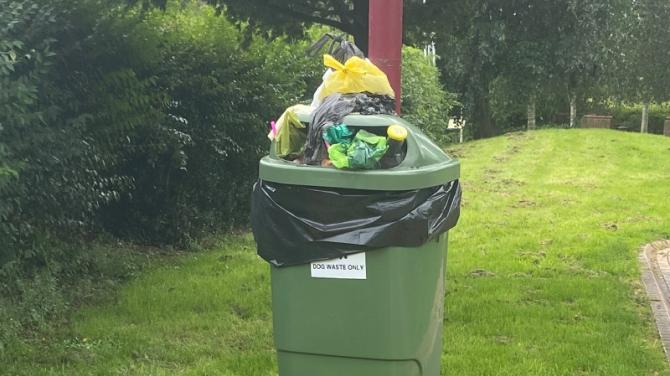 A Guardian reader has slammed the upkeep of Ballymena’s famous People’s Park.

In a passionate letter to the editor, Rodney Kernohan said he had been confronted with overflowing bins and crumbling paths.

Mr. Kernohan said it looked like the Park, which is marking its 150th anniversary, was not being given the treatment it deserves.

Sir - Last August, it was reported that local councillors had set aside a pot of more than half a million pounds to turn Ballymena’s People’s Park into a ‘Destination Park’ before August 2020 to celebrate its 150th anniversary.

Last Saturday afternoon I walked my two small dogs around the park to find their bins spilling over with dog foul bags, disregarded coffee cups and general rubbish.

It's ironic that Mid and East Antrim Borough Council condescendingly reminds all dog owners at every given opportunity to lift their dog’s foul but if they can’t get their Park’s Department to carry out the simplest of tasks to at least empty their bins, it doesn’t do much to encourage the very few unscrupulous, lazy dog owners who don’t lift-up after themselves.

All of this prompts a much bigger question.

With tired, unkept park furniture, broken light fittings, crumbling paths, an overgrown and disregarded bowling green and a visitors centre that offers no form of hospitality services, can we assume the People’s Park in Ballymena has been forgotten about just like their millennium-celebrated Eco’s Centre and Park?

Questions need asked, has Council lost all interest in its ‘below-average’ parks and open spaces?

Besides improving the children’s play area, where did the rest of the People’s Park refurbishment fund go to or has it been squandered elsewhere

? It has been proven time and time again that visiting open spaces and parks help improve our wellbeing and mental health, why are our Council not taking this as serious as other local council areas?

Representatives from Mid and East Antrim Borough Council urgently need to put into place an action plan and deliver tax payers a decent, fit-for-purpose selection of outdoor places to visit, enjoy and exercise in.

If they were to take the time and visit neighbouring Antrim and Newtownabbey Borough Council’s facilities such as ‘Antrim Gardens’ and ‘Mossley Mill ' they would see what proper modern parks and open spaces look like.

A detailed, constructive and open response from Mid and East Antrim Borough Council in next week’s Ballymena Guardian would be very much welcomed.