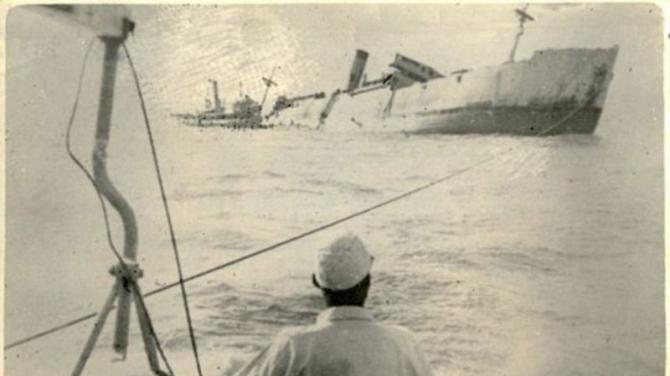 AN English author’s research into a little known war crime of World War 2 has revealed the name of the ‘forgotten’ Ballymena man who was never recorded on the town’s War Memorial.

Robert Widders, an author, war historian and veteran contacted the Ballymena Guardian to inform us about his latest book which, he said, contained the story of how a serviceman from Ballygarvey had lost his life during the Far East campaign.

Mr. Widders told us that Ballymena man John Allison had died in a Japanese POW camp just weeks after the ship in which he was being transported was torpedoed by an American submarine whose crew were oblivious to the ‘cargo’ of Allied prisoners.

It was in the immediate aftermath of the attack that one of the most cold blooded acts of the conflict took place with reports of Japanese guards shooting desperate survivors as they tried to get out of the ship’s hold and others machine-gunning POWs who were floundering in the water.

Obviously such a tale aroused curiosity and we decided to flesh out the story with any additional information we could find.

And that is when we discovered that Allison’s name was never inscribed on the World War 2 panels in Ballymena’s Memorial Park.

Puzzled by this omission, we double checked the details Mr. Widders had given us with the Commonwealth War graves online search engine of war fatalities.

As an additional measure of scrutiny we checked with the Irish census of 1911 and found the Allison family, including John, clearly recorded as living at Ballygarvey.

A Japanese POW document nailed the story down even further with John’s ‘place of origin’ clearly given as ‘Ballygarvey, Ballymena, Northern Ireland.’

So what were the events which led the local man to his untimely death in Japan?

And what did happen when the US Navy unknowingly sent so many Allied soldier’s to their graves?

Robert explains: “John Allison came from Ballygarvey, Ballymena. His deceased mother was called Catherine and his father was Henry Allison.

“John's wife, Edna, was living in Devon at the time of his death. Presumably to be near to the Royal Navy base.”

John was a Sick Berth Chief Petty Officer [a medic] in the Royal Navy.

Prior to being captured John had been serving at HMS Tamar in Hong Kong as a Sick Berth Chief Petty Officer in the Royal Navy.

As part of a general Pacific campaign, the Imperial Japanese launched an assault on Hong Kong on the morning of 8 December 1941.

Just before the British surrendered, drunken Imperial Japanese soldiers entered St. Stephen's College, which was being used as a hospital.

The Japanese then confronted two volunteer doctors and shot both of them, when entry was refused They then burst into the wards and attacked all of the wounded soldiers and medical staff who were unable to hide, in what was known as the St. Stephen's College incident.

This ushered in almost four years of Imperial Japanese administration and was only a foretaste of the cruelties imposed on those who fell under the rule of the Japanese forces.

John Allison was one of 1816 POWS sent to Japan for slave labour on a freighter named the Lisborn Maru.

A week after sailing 828 of these men were dead, killed as a calculated act of murder.

The men were kept in three cargo holds in cramped and insanitary conditions, sleeping on makeshift wooden platforms without room to stand up properly. Many of them were suffering with illnesses ranging from beriberi, pellagra, diphtheria, dysentery, diarrhoea, to infectious skin diseases.

On October 1 1942 the ship was torpedoed off the cost of China by USS Grouper.

All the POWs were kept down below in the holds despite the explosion. The Japanese crew passed down hand operated pumps which some of the men used to try to pump out water from the sinking ship.

After a failed attempt by the Japanese Navy to tow the ship to the shore, the guards battened down the covers over the holds, blocking the air supply, leaving the POWs trapped inside in total darkness, without food or water.

Robert says: “Many of the POWs died during the next twenty-four hours, drowning in the bilges, or collapsing from exhaustion as they pumped water out of the ship.

“The Japanese had evacuated their own crew and soldiers and had left an armed six-man suicide squad onboard to make sure that the POWs did not escape from the sinking ship.

“The following morning the ship gave a lurch and the POWs in the next hold used a smuggled knife to cut the hold lashings and escape on deck.

“They killed the Japanese soldiers and released the men from the other holds, some of whom were able to jump overboard before the ship sank.”

Some were shot on the ship, others in the water as they tried to swim away.

Still more were taken by sharks and, in their weakened state simply drowned. Some of the survivors - like John Allison - who eventually ended up in a POW camp succumbed to the harsh treatment meted out under the Japanese regime.

John died on 23 Oct 1942 age 36 at Kokura in Japan.His cause of death was given as pneumonia - obviously exacerbated by the terrible conditions.

After the war, John's family chose this inscription for his memorial in the CWGC war cemetery in Yokohama, Japan: "TAKE UP THY CROSS THEN IN HIS STRENGTH AND CALMLY EVERY DANGER BRAVE"

Footnote: Robert Widders is an author of three books. His memoir, A Few Deeds Short of a Hero, recounts his life and experiences in the British Armed Forces.

He has written two historical books on the contribution of Irish soldiers to the British Armed Forces during World War II, Spitting on a Soldier's Grave and The Emperor's Irish Slaves: Prisoners of the Japanese in the Second World War.

Robert’s story of the sinking of the Lisbon Maru and the deprivations endured subsequently by POWS is told in ‘Forged in Blood and Music’ and is available on Amazon for £8.99 paperback.